Teaching Children About the Mi’kmaq

The following Q&A is being republished with permission from the author, Maureen Googoo of kukukwes.com, a news website dedicated to covering Indigenous news in Atlantic Canada:

Theresa Meuse’s new book is L’nuk: The Mi’kmaq of Atlantic Canada. In it, Meuse explains to 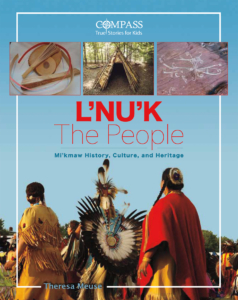 readers such things as making baskets and birch bark canoes and using weirs for eel fishing. She also writes about the Mi’kmaw language and the Peace and Friendship treaties signed between the Mi’kmaq and the British Crown.

Meuse, originally from the Bear River First Nation in Nova Scotia, now lives in Windsor Junction near Halifax. She works as the Aboriginal student support worker for three schools in Lower Sackville, NS. This is Meuse’s third published book.

Kukukwes.com: What is this book about?

Theresa Meuse: It’s a book that is actually going to share summaries of little bits and pieces of the Mi’kmaq life before European colonization and of course right up to today. The book actually tries to teach people, not only the non-Aboriginal society, but our culture as well, about the different parts of our history, as well as the different pieces like, for example, our spirituality.

Most of it is based on my teachings and some people may read it and find, “I may not agree with that.” That’s okay. These are just my teachings – it’s just to give a framework for people to start understanding more about our culture.

Kukukwes.com: What inspired you to write a book like this?

Theresa Meuse: I’ve always thought about writing a book about like this and I just never really thought it would happen because I was just so busy with my other stories that come from the sharing circle. Nimbus publishing has published a series of books on different topics like Africville, Sable Island and the Titanic. They’re a cute little reader [series] that is used in the school system. So they asked me if I would be interested in writing one on the Mi’kmaq. And of course it was like, yeah. So that’s how it all came about.

Kukukuwes.com: Why is this book necessary or important?

Theresa Meuse: Well, I think it is clear that there is not a whole lot of relevant cultural information in the school systems. We do have the support of the Department of Education with this book so we’re hoping that at the end of the day, they are going to look at this and agree that it really needs to be in our school systems and get it there. It’s important for the younger generation to start learning at a younger age so they can carry that throughout their whole life.

Kukukwes.com: Why did you write this book for ages 7-10?

Theresa Meuse: It may be for a younger group, but you know what? Even as an adult, if you don’t know much about the Aboriginal culture, it’s going to be a very simplistic, easy way to learn about the culture. So even though we’ve targeted that age group, it’s actually for everybody.

Kukukwes.com: What sort of research did you conduct in order to write a book like this?

Theresa Meuse: I had already done a lot of researching throughout my years working as an Aboriginal consultant. I used to do a lot of cross-cultural training for different groups. I had a lot of information to start with. When it came to specifics like the language, the treaties, certain things like making a birch bark canoe, of course, I had to go to Todd Labrador for that. So I went to a lot of key people like Bernie Francis and Roger Lewis and different (people) who knew a lot about our culture that I really wasn’t aware of. So, I actually learned a lot from writing this book myself.

Kukukwes.com: What was the most interesting thing you found out while you were doing the research?

Theresa Meuse: With someone like Roger Lewis, I talked to him about the eel weirs and he explained to me about how they were set up, especially at Kejimkujik, and how they were used. I was just intrigued by that. Also with Bernie Francis, l learned about the language from his perspective and getting the spelling of the correct words and the meanings. That was really eye-opening. It taught me a few more words that I did not know before. Just the environment, like Todd Labrador with making the canoe, the traditional birch bark canoe, that was probably really eye-opening because I didn’t know a lot about the birch bark. I just thought you went and got it and that was it but there’s really a lot more to it than that. For making baskets, our traditional Mi’kmaq baskets, it was fun. It was really fun getting the pictures for it as well.

Kukukwes.com: What do you want readers to know about Mi’kmaq people by reading this book?

Theresa Meuse: I want them to know that first of all, yes there were struggles but also there were good things about our culture. I want people to get to learn the truth and as much accuracy as possible about the different parts of our culture. Like I said most of it is from a summary perspective. So if nothing else, hopefully it, at least, opens up their eyes to want to learn more. Hopefully it will be the framework for them to go on to learn more.

Kukukwes.com: What sort of impact or impression do you want to leave with readers after they read this book?

Theresa Meuse: I hope that they are encouraged to want to share it with others. They will buy the book and buy it for their nieces, nephews, cousins, children and that they will encourage the schools also to have it in their systems as well.

This article was originally published Dec 22, 2016 at kukukwes.com.

Maureen Googoo is an award-winning journalist from Indian Brook First Nation (Sipekne'katik) in Nova Scotia. She has worked in news for nearly 30 years for media outlets such as CBC Radio, the Chronicle-Herald and the Aboriginal Peoples Television Network. Maureen has an arts degree in political science from Saint Mary's University, a post-graduate degree in journalism from Ryerson University and a Masters degree in journalism from Columbia University Graduate School of Journalism.