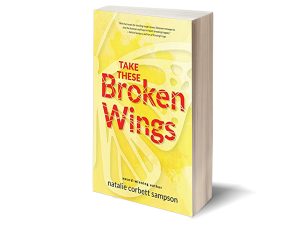 If I were still working as an educator, something I did for 32 years, I’d want Take These Broken Wings on my bookshelf. And not just a single copy; multiple copies. I have a gut feeling it’s one of those special books YA readers will feel speaks directly to them through the first-person narration of compulsive list-maker Layne Wheeler, as she tries to regain control of her life.

The brilliantly designed cover art begs the question Natalie Corbett Sampson poses: can a life broken into pieces ever be put back together if some of the pieces are missing? The circumstances of Layne’s life are truly devastating. Both her parents and twin sister Penny have been killed in an automobile accident caused by a drunk driver as they drove to see her in the hospital, where she’d been taken following a skateboard accident, incurred while trying to impress a boy she’s crushing on.

Some months before, Zak, her older brother, had left home after a terrible argument, the reason for which her parents had refused to discuss. Now that they’ve been orphaned, Zak has returned to support Layne, but the reason for his leaving remains a secret.

Layne, meanwhile, copes with complex feelings–grief, guilt about having precipitated the accident which killed her family, suspicion about Zak and anxiety around friends–by disconnecting from reality and sinking into depression.

While Take These Broken Wings has all the components of a truly dark novel, it’s anything but.  True, Sampson addresses some thorny issues, including the coming out of LGBTQ youth, the question of what happens to us after we die and the degree to which we can control our lives, but she writes about them with honesty and humour and manages to find hope amid despair.

After two months Layne is able to say, “I close my eyes…I can see Penny there in my mind where she’s always been, where she’ll always be. She whispers, ‘See. It’ll be okay,’ and I believe her. I don’t know how, but I don’t have to figure that out right now. I just know it will be. I’ll build a new okay.”

Note to librarians and school counsellors: if you believe in the power of bibliotherapy, put this one on your purchase list.