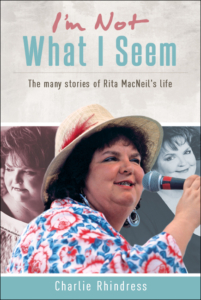 Symphony Nova Scotia has removed a recent biography of Rita MacNeil, I’m Not What I Seem by Charlie Rhindress, from its pop-up store at a concert honouring MacNeil in March.

After scheduling a talk from Rhindress about the book and purchasing copies for resale, symphony officials changed their minds at the last minute. They cited objections from MacNeil’s son Wade Langham as their reason.

But Langham told CTV News he had nothing against Rhindress or the book, which he had not read. Langham did not respond to ABT‘s request for an interview.

MacNeil’s 1998 autobiography was sold at the concert instead. “I understand that Rita’s estate wants to protect their interests, but I don’t see the book as competition for any product they might want to sell,” says Rhindress. “I think it is more promotion for Rita as a unique artist.”

Publisher James Lorimer of Formac Publishing in Halifax thinks this could be the country’s first example of a symphony book ban. “Musicians and orchestras now make a practice of selling related items at concerts,” he notes, “but I’ve never heard of a book being banned from sale.”

Rhindress’ book has been nominated for an Atlantic Book Award and in December it was the #1 regional book in Nova Scotia bookstores.