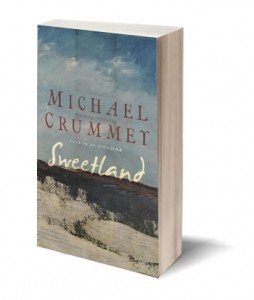 Michael Crummey’s last novel, the 2009 Commonwealth Prize winner Galore, spanned multiple generations and centuries, employing elements of mythology to illuminate a broad scope of Newfoundland history. His new novel, Sweetland, is a contemporary story — the residents of this fictional rugged island watch Mad Men and use Skype — but once again the internal strength of the characters is foremost.

The residents of Sweetland have been offered government compensation to leave the economically destroyed island. After a tragic accident, former fisherman Moses Sweetland fakes his death and remains behind, which is when the novel really gains momentum. As his physical and mental health deteriorates, Sweetland reminisces about his family and friends, of deaths and births, and the island’s mythology. While this may be a modern tale of survival in an inhospitable landscape and economy, Crummey’s secondary character sketches are a poignant tribute to resilient generations past.

At times both humorous and downright heartbreaking, expect Sweetland to make appearances during this year’s award season.