A surreal, poetic trip in The Book of Festus 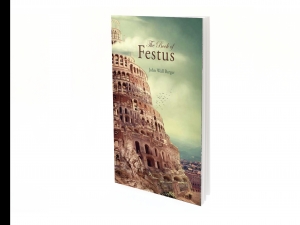 John Wall Barger’s latest volume of poetry, The Book of Festus, is a challenging departure from his previous oeuvre. It is written in the style of James Joyce’s Ulysses, except instead of exploring the streets of Dublin, Barger explores the city of Halifax, sometimes as experienced by a character called Festus, and other times as the city itself.

In the poem, “What Park Lane Thinks, Stomping Public Gardens,” the park surveys the detritus of modern society and seems to declare, “Wire. The/Gates.” In another poem, “Festus, Hansel & Gredel,” ancestors speak to Festus, despairing of the changes that have occurred over the centuries. Festus replies,

Zealots, I am as scared as you, blown

by the wind of the poem

to the backside of a river

of a new constellation

but I don’t know what it means.

A surreal time-travel trip, The Book of Festus is as much about Halifax and Canadian history as it is about the ache for identity and meaning in a shifting and shifty world.