Student ABCs Show How Viola Desmond “quietly made a difference” 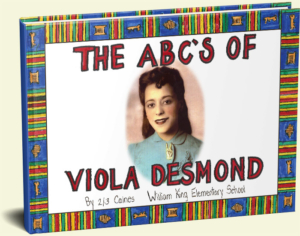 Hailed as effective learning tools since the days of Shakespeare, alphabet books are a mainstay in the publishing industry. Many ABC books are aimed strictly at teaching children the alphabet. Others are crafted to deliver a complex story with creative flair.

Kudos to the Grades 2 and 3 students at William King Elementary School in Herring Cove, Nova Scotia for a superb ABC account of a civil rights champion.

Rendered with honesty and charm, the book honours Halifax native Viola Desmond, a black beautician whose 1946 stand for justice in a segregated cinema helped to end discriminatory practices in the province.

Clearly well-versed in the Desmond narrative, the students bring a wealth of detail to the drawings and text in the volume. “G is for Green,” notes a panel. “Viola’s green car broke down on her way to a meeting.”

“M is for Manager and Move,” reads another.  “The manager told Viola Desmond to move to the balcony.”

Another drawing features a Nova Scotia flag and a group of stick people under a cartoon bubble that reads, “We are sorry, Viola.”  The accompanying letter? “P.” “P is for Pardon. The government of NS pardoned Viola Desmond in 2010.”

The next page showcases an illustration of a serene brown-skinned woman in a polkadot dress. The image also includes a cartoon bubble. It reads, “I didn’t mean to make such a fuss.”

The letter? “Q is for Quietly. Viola Desmond quietly made a difference in our history.”

Flip back to “E” for a sublime drawing of the scales of justice. “E is for Equality,” the panel reads. “The incident was the beginning of a long struggle for equality in our country.”

The winner of a 2016 African Nova Scotian History Challenge award, The ABC’s of Viola Desmond deserves pride of place in every home, library and school in the nation. And here’s a standing “O” for teachers Pam Caines and Beatrice MacDonald for bringing out the best in their students. Ovation.