2
2
Enter your postal code to locate your nearest local book seller and library: 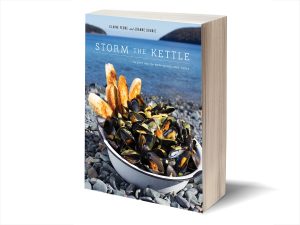 Storm the Kettle, Resetting the Newfoundland Table by Elaine Feore and Joanne Goudie, former owners of the fondly remembered Blue Fish Bistro in Grand Falls-Windsor, is an appetizing cookbook. It contains a variety of excellent, contemporary recipes with easy-to-find, popular ingredients and flavours. Enough appetizers, mains and desserts are featured to allow any home cook to put together a delicious three or four course meal.

Despite its title and cover photo of mussels in an enamel pan on a rocky Newfoundland beach, Storm the Kettle echoes Rachael Ray’s or Jamie Oliver’s pantry more than it does a tradition-bound Newfoundland kitchen. You’ll find no cod tongues, hard bread, bakeapples, salt meat or Newfoundland grown savoury in Storm the Kettle’s larder.

Newfoundland essence is mostly supplied by Craig Goudie’s beautiful photos. For example, juxtaposed with a trio of spice rub recipes–Moroccan, Greek and Louisianan–is a smartly composed photo of colourful wooden buildings, clinging to the terraced cliffs of a Newfoundland fishing village. Indeed, many of Goudie’s photos are reminiscent of those famous, ubiquitous Newfoundland and Labrador tourism ads.

At a time when many Newfoundland chefs are embracing Newfoundland’s food heritage–utilizing local, wild game, foraging for wild plants and mushrooms and developing their own interpretations of classic Newfoundland dishes–Storm the Kettle reflects a Newfoundland palate that’s more worldly than regional. Newfoundland millennials, especially, have acquired a taste for international flavours.

While several recipes in Storm the Kettle, like salt cod and parsnip fritters with garlic aioli and big house seafood chowder have Newfoundland roots, the majority reveals Asian, European, Middle Eastern and Mediterranean influences. Newfoundland and Labrador, including its most populated southern region, has changed demographically thanks to immigration. St. John’s, for example, is now a cosmopolitan city. New Newfoundlanders and Labradoreans have brought their foods and traditions with them. Storm the Kettle champions a new culinary reality.