Steal Away Home an Intriguing Examination of Human Bondage 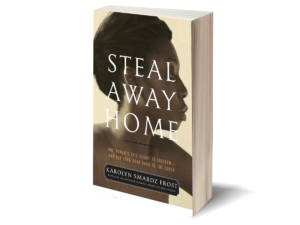 Acadia University professor Karolyn Smardz Frost has rightly earned acclaim for unearthing (literally and figuratively) the hidden history of Blacks in Canada. In 1985, she helped to excavate the residence of Thornton and Lucie Blackburn, enslaved blacks from Kentucky who took refuge in Toronto where they founded the city’s first taxicab company. Her award-winning book, I’ve Got a Home in Glory Land (2007) documents the couple’s journey.

Steal Away Home chronicles the life of another enslaved Kentuckian, Cecelia Jane Reynolds. At age nine, Reynolds was “gifted” to her master’s teenage daughter, Fanny Thruston. In her forced role as a “lady maid,” Reynolds travelled, at age 15, with the Thruston family to a swank hotel on the US side of Niagara Falls. It was 1846.

There, with the aid of free Blacks who worked at the establishment, she fled to Canada.

“It was surprising … that Southern tourists still insisted on carrying their servants with them to the brink of the Niagara River,” Frost writes. “But they did it all the time, unable to imagine a circumstance without Black hands to fold their clothes or to ready them for bed after an evening’s entertainment. … One day the Thrustons returned to the (hotel) only to find that Cecelia had vanished.”

The absorbing narrative turns on Reynolds’ efforts to secure the freedom of her enslaved mother, Mary, from members of Thruston’s extended family. In an effort to do so, Reynolds exchanged a series of letters with her former mistress (who had taught her basic literary skills).

The correspondence gives rise to an astounding alliance between an aristocratic Southern belle and a determined Black woman who’d once been viewed as “property.”

In a letter to Reynolds, Thruston wrote: “I often think of you Cecelia … I can never forget you, and far from reproaching you for leaving me, I think and always thought it a very natural desire for the slave to be free.”

An intriguing “both sides now” examination of human bondage.