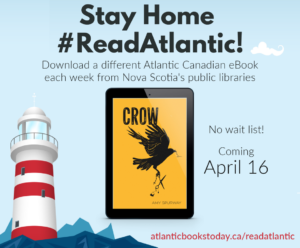 Public libraries across Nova Scotia are providing unlimited access to 5 Atlantic Canadian eBooks from their Read Local collections, starting April 16 with Crow by Amy Spurway. All you need is your free library card.

This Crow will ruffle a few feathers. When Stacey Fortune is diagnosed with three highly unpredictable — and inoperable — brain tumours, she abandons the crumbling glamour of her life in Toronto for her mother Effie’s scruffy trailer in rural Cape Breton. Back home, she’s known as Crow, and everybody suspects that her family is cursed. With her future all but sealed, Crow decides to go down in a blaze of unforgettable glory by writing a memoir that will raise eyebrows and drop jaws. She’ll dig up “the dirt” on her family tree, including the supposed curse, and uncover the truth about her mysterious father, who disappeared a month before she was born. But first, Crow must contend with an eclectic assortment of characters, including her gossipy Aunt Peggy, hedonistic party-pal Char, homebound best friend Allie, and high-school flame Willy. She’ll also have to figure out how to live with her mother and how to muddle through the unsettling visual disturbances that are becoming more and more vivid each day. Witty, energetic, and crackling with sharp Cape Breton humour, Crow is a story of big twists, big personalities, big drama, and even bigger heart. 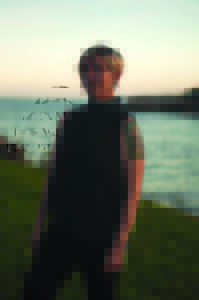 About the author: Amy Spurway was born and raised on Cape Breton, where, at the age of 11, she landed her first writing and performing gigs with CBC Radio. She has worked as a communications consultant, editor, speech-writer, and performer. Her writing has appeared in Today’s Parent, the Toronto Star, Babble, and Elephant Journal. She lives in Dartmouth, Nova Scotia.

Hey, and since we’re all reading Crow together, why not start a book club? Download the Book Club Guide here!

You can also read our interview with Amy, or check out some of the rave reviews: