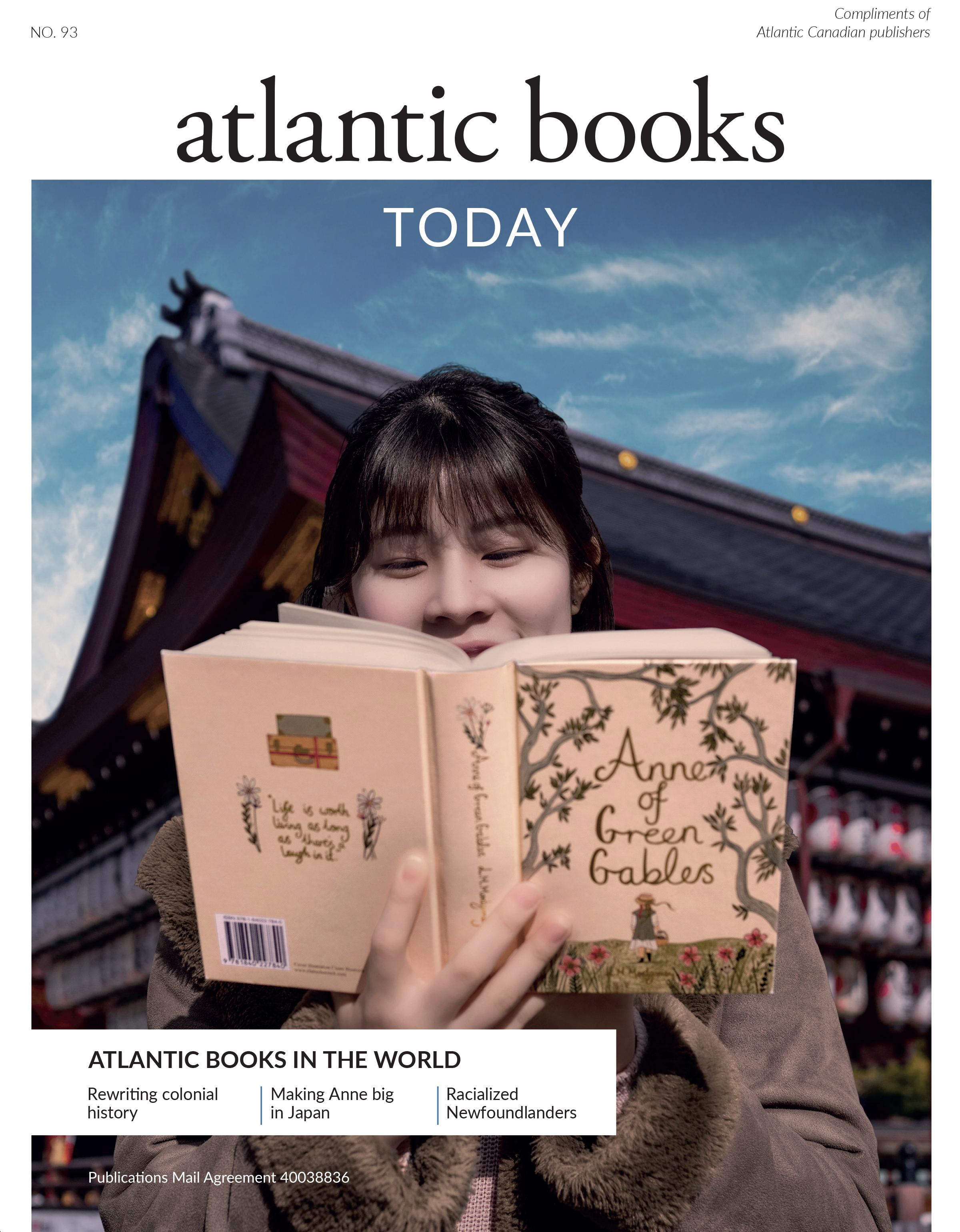 There remains a dearth of disability literature in our region. Thankfully there is Paul Power’s Crippled, an award-winning play based on his experiences living with a disability. The story is honest, dark but hopeful. It is deeply personal, yet likely to find universal resonance on the level of Power’s inner struggles.

This Is How It Is
Sharon King-Campbell
Breakwater Books

Raw as split fish, these peripatetic poems prowl the globe like a stealthy snowball, picking up and subverting myth and history en route, amplifying historically quietened voices in the process.

Like modern society, these poems are heavy with the burden of colonial history at the precipice of environmental destruction. Yet they manage to play, with language and awe at the bounty of the land and ancient Mi’kmaw culture, and the resilience of the spirit and healing after generations of trauma.

All the People are Pregnant
Andrew DuBois
Goose Lane Editions

Wordplay at its fractured and fluttering finest, tearing down and differently putting back together forms of conversation with sharp, insightful wit, exploring divergent traces of time. This kind of poetry keeps the brain fresh and gets the heart pumping.

The Trouble With Everything
Lesley Choyce and Doug Barron
Pottersfield Press

Two original members of the SurfPoets have struck up the band again, with poetry from Lesley Choyce and original music from Doug Barron. The tunes are groovy and the poetry positive. Shake off the bad vibes.

Simona: A Celebration of the SPCA
Chad Norman
cyberwit.net

Norma’s perspective shift from man to cat is a delight for animal lovers. Much more than that, it is an empathetic reminder that humanity’s place is not above, but with, other living things. An important lesson if we are to save ourselves.

A prolific and prophetic bard, this is M Travis Lane’s astonishing 18th collection. Despite its economy, it covers vast ground, with fantastic personifications of nature (“the water seemed      almost subdued”) and reflections on the grand cycle of life and death (“running in a tight circle, nose to tail.”)

Salazar, who edits for The Fiddlehead from Wolastoqiyik territory, has written poems for a shifting age, recognizing both Indigeneity and the importance of migration, how cultures are resilient yet changing, creating the need for new ways of being, and new meanings to old human emotions.

A re-release of a classic from 2000, this cookbook is actually a charming collection of not only fine recipes from her restaurant in Corfu, but also of patchwork images of her Venetian villa, and stories of the celebrities she fed over 30 years. A delightful taste of the Mediterranean.

An intersectional feminist analysis of components of the Stampede including its parade, First Nations Village and Princess, and chuckwagon races, using varied forms including memoir, poetry, social media, political theory, history, photography, found ads, with a consistent dose of humour. Williams examines who is being left out of the ole Stampede narrative.

A poetic meditation on home, finding our place in the world when so many of us live far from where our ancestors trod. Perhaps even more deeply, Ali tells the story of a brutalized Indigenous community from an immigrant’s perspective and concludes with practical suggestions on responsibility and generosity.

Harsha Walia is a foremost thinker and organizer on immigrant rights and has written a comprehensive analysis of the complex global issues affecting human migration. She connects issues that have been artificially siloed in too many other texts, such as climate change, unchecked capitalism, colonialism and white supremacy.

Woolfitt, who is perhaps best known for large-format paintings, showcases his process here, working with bamboo or graphite, silver or metal leaf to create a reinterpreted image on the page. A stunning collection of more than 65 reproductions of the artist’s distinctive drawings.

Anything But a Still Life
Nathan Greenfield
Goose Lane Editions

Greenfield offers new insight into Fredericton-based Second World War artists Bruno and Molly Lamb Bobak. The most fascinating aspect of this biography may be the development of their works as the Group of Seven’s influence declined and abstract works became the vogue.

These sketches—pen and pencil & ink and watercolour—were in storage more than 50 years. They were drawn during the First World War by Corporal Edward Shenton. Rex Passion skillfully weaves in Shenton’s personal story.

Komatik Press has produced something unique, a paperback elevating the visual. It works beautifully, with Torbay-based artist Bajen-Grahm as our mixed-media muse. She in turn celebrates a staple of Newfoundland practical architecture, the root cellar, in abstract and somewhat Rorschach renditions. A visual exultation of place.

Don Pentz has a long history—60 years—as a naturalist, woodsman, park interpreter and artist in the Kejimkujik National Park in Nova Scotia. In this collection, gorgeous watercolours illuminate the pristine beauty of “Keji” and pay homage to sacred Mi’kmaq territory.

Moore writes like he’s allergic to convention. His love of literature is apparent in these pages, as is his gratitude for working in it. “…over the years I’ve been allowed to live in multiple provinces, work with countless authors, publishers, and magazines…” His experiences elucidate many insights.

The premise—retired elder couple start a sex shop in a small town—is excellent. The delivery is uproarious, because Doucet’s characters, while fitting useful tropes, are fully drawn and multifaceted. A fast-paced and lighthearted read but one that gives overdue attention to a resonant subject: sex among the venerable.

This is a mashup of genre, a sort-of fictionalized archivist’s journal—hard to tell fact from fiction, they blend together. More disjointing is the collision of sport and music, academics and high tech. But the result is comically entertaining, presented with “performative verve,” as novelist Jacob Wren puts it.

Conlin, a master of the language craft, weaves this tense, gothic tale together intricately from multiple perspectives and generations. Balancing divergent perspectives is a difficult trick, and Conlin balances the viewpoints expertly, maintaining interest throughout. The result is a gripping story of trauma and its long-term resonance.

In a classic setup, seven guests are snowed into an isolated mountain resort by an avalanche when, one by one, they mysteriously, and horribly, start dropping dead. Nature becomes antagonist here, scaring the hell out of protagonist and reader alike. Mariaffi displays her usual mastery of tense, atmospheric thriller writing.

Schwarzmann’s stories play at the edge of reality so that the reader feels the tension of nothing being as it seems. His surrealist alternate realities show us how precarious any norm can be, and that mundane staples like safety and security can be rearranged completely in an instant.

Captain Kidd. Vikings. Aztecs. Spanish conquistadors. Shadowy royal British mercenaries. All theories associated with the treasure presumed buried in Oak Island. John Bell analyzes the evidence and points out strengths and shortcomings of each theory with archival visuals and new illustrations, bringing the mystery to life on the page.

A collection of loving profiles of railway workers, cabin owners and international travellers to The Gaff, a former railway settlement in the Central Newfoundland interior. Spracklin and his wife have owned a cabin there for decades, raising two daughters and falling in love with the wildlands and the characters.

The Girl Who Could Fly
Ian Roy
Nevermore Press

An ancient spell book, superpowers, a nefarious villain, a Second World War mystery, an international (Iceland and Canada) adventure featuring a brave young heroine—what’s not to love? The stakes and tensions are high, helped by the fact that Olive is an easy protagonist to cheer for.

Wildly multimedia, a tender and beautiful story about a girl, M, who hums a perpetual ode to the interconnectedness of all living things. The art is made from pressed flowers, leaves, moss and mycelium. It comes in hardcover or as an online audio hum-along flipbook.

Harry Bruce is one of Canada’s finest essayists. These are some of his best. His essays—ranging through diverse topics like dangerous natural pests and joyful wild fauna, first heartaches, and curling on a Scottish laird’s pond—are more engrossing than any Netflix serial.

No Thanks, I Want to Walk
Emily Taylor Smith
Pottersfield Press

Taylor-Smith walked 45 kilometres daily for two months, up the New Brunswick coast to Quebec City. She made mistakes along the way but was heartened by support from strangers providing massages, ice cream and more. And she developed an even deeper spiritual bond with the land.

On a visit with her 89-year-old mother in Corner Brook, Monica Graham got worried when she saw her coat the chicken breasts with dish soap instead of cooking oil. This book is a touching memoir filled with practical advice on transitioning a parent into continuing care.

The Race to the Bottom
Bob Chaulk
Pottersfield Press

It’s remarkable how unfamiliar we remain with our planet’s oceans. Through scuba diving, Bob Chaulk has discovered worlds in Halifax Harbour, including historical objects discarded, which he researches and documents. He also witnesses our destructiveness, worn by birds seeking food in golf balls and fishes trapped in plastic.

The subtitle belies the extraordinary life story of Mary Elizabeth Leblanc, an orphan who stayed with lightkeepers in Souris then farmers in St. Georges, became a military wife, at one point afflicted with tuberculosis, later having to confront her husband’s alcoholism while nurturing children in Germany and New Brunswick.

Freedom 55 wasn’t as expected for Martha Vowles, who became caregiver to her parents, who both developed dementia. Her memoir is told with humour and grace, perhaps more than she felt navigating calls to the police, trips to the hospital and one misplaced stepmother.

Earley travelled across Nova Scotia seeking kid-friendly adventures, year-round, on a budget and first class, off the beaten path and at popular tourism locations. Just a few of the 25 adventures are McNabs Island, the Salt Marsh Trail and the Shearwater Aviation Museum.