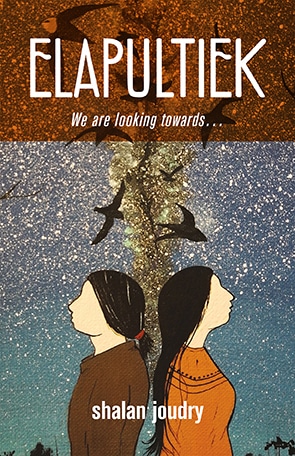 Elapultiek (We Are Looking Towards) by shalan joudry is a play which was originally written for an outdoor performance at the Ross Creek Centre for the Arts in 2018 and published in book form in 2019 by Pottersfield Press. While I was not lucky enough to have experienced it live, it comes alive on the page: a dialogue between Nat, a Mi’kmaw drum singer and Bill, a Euro-Nova Scotian biologist that is teeming with humour and poetry and difficult and important conversations.

There is so much packed within this small volume—as Nat and Bill return each night to Mi’kmaw reserve land to count endangered chimney swifts, I was so taken in not just by the words spoken between them but everything that’s woven into their interaction: the histories that inform it, the back and forth feelings of hope/lessness in affecting change through conversation, the differences between hearing and listening, looking and seeing.

Nat introduces the idea of Two-Eyed Seeing (Etuaptmumk in Mi’kmaq) and in the afterword joudry provides more background on the framework as an approach to the conversations in the play: “it reminds us of the importance to see the subject through both a mainstream ecological lens or eye as well as through a cultural Mi’kmaw lens for the benefit of all.” She also shares her own experience with Etuaptmumk in conservation work in Mi’kma’ki. The concept is also represented beautifully in the cover artwork by Melissa Sue Labrador.

I don’t want to give away too much of the conversation, but here’s a little snippet to show you why you’ll want to hear more from Nat:

Bill: Are we having a conversation?
Nat: I know I am. I’m not sure about you.