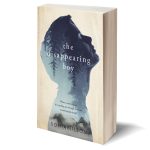 It’s not easy to leave the only home you’ve ever known to start over in a brand new city and school. Thirteen-year-old Neil MacLeod finds himself doing just that, now that his mom has uprooted them from their perfectly happy home in Vancouver to come and live in Ottawa.

Neil is shocked to learn he has a grandmother living in Ottawa who wants to meet and get to know him. But meeting this previously unheard-of grandmother makes Neil more determined to find out who his father is and why his mother refuses to tell Neil anything about him.

With the help of his new friend Courtenay, Neil takes matters into his own hands and begins a search for answers. What he discovers is so unexpected he runs away to New Brunswick in search of the grandfather he has never met, in an effort to get away from the enormity of what he has just learned.

The Disappearing Boy is a thoughtful, sensitive depiction of one boy’s struggle to come to terms with the truth about his family. Neil’s feelings of betrayal, anger at his mother and confusion about his own feelings toward her are realistically portrayed.

His gradual unease about his grandfather’s harsh and condemnatory attitude leads him to sympathize with his mother and reevaluate his feelings. The author deftly hands the full range of Neil’s conflicting emotions, with his ultimate realization of how much he still loves and needs his mother feeling truly satisfying.

While readers may long to learn more about Neil’s mother’s experiences, thoughts and feelings, this book beautifully captures the complex nature of familial relationships.