The Song of the Shirt: Cheap Clothes Across Continents and Centuries 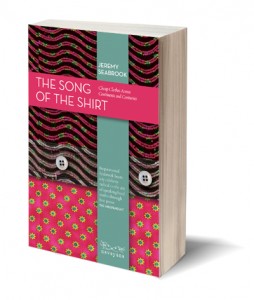 Oh, Men, with Sisters dear!
Oh, Men, with Mothers and Wives!
It is not linen you’re wearing out,
But human creatures’ lives!
Stitch — stitch — stitch,
In poverty, hunger and dirt,
Sewing at once, with a double thread,
A Shroud as well as a Shirt.
—from “The Song of the Shirt” by Thomas Hood (1843)

Anyone looking at Dhaka and its hundreds of garment factories, its tens of thousands of cycle rickshaws, its construction workers provisionally living in the shells of apartments they will never own, its maidservants, faces patterned by grilles on the verandahs which keep them captive, can only wonder at the bleakness of alternatives that has driven people to find a precarious sanctuary in this place. For Dhaka—this constricted camp for the evicted of development—scarcely merits the name of ‘city.’ Is it the poverty of ancient fishponds and rice fields, fallen orchards and abandoned homesteads that has sent people here, or the promise of wages which are eaten up in advance by the price of rent and food that rises as fast as the greedy floodwaters that have chased them from home?

It is difficult to conceive that the humiliations which young women and men endure in the scanty choices for their labour in this labour camp masquerading as city can be more bearable than the indignities of villages they called home until only the day before yesterday: the woman transplanting rice seedlings, miming the gestures of her drowned sister in the waters of the paddy field; the woman beating sheaves of rice against the threshing stone; the man carrying his implements over his shoulder at the end of a long day hoeing and weeding on land he will never own; the family contemplating the eroded fields that will be deposited elsewhere as someone else’s fertile silt; the woman for whom the charity of the mosque is the only thing that stands between her children and destitution.

Hope is inscribed in the ugly landscapes of the city, in the white light of its factories that shed their radiance on the slums below, in the market with its pyramids of scarlet and green vegetables, in the rented shelter shared with strangers—hope that has been chased from places where land is lost to the Padma, the moneylender or the shifting topography of the country, where fields can no longer provide sustenance and the ties of kinship have become fetters.

It is not only daily working conditions, an income that limps behind prices, the demands of the home place for remittances that make life in the city appear intolerable. There are sleepless nights under burning tin roofs, the absence of water, the darkness of electricity outages, the airless tenements; to all this is added the harassment from overseers and foremen, compulsory overtime when orders have to be finished, sexual advances by those who exercise power over them, and even worse, periodic catastrophes—explosions, fires and the collapse of buildings that leave scores or hundreds of bodies wrapped in white cerements, where their loved ones can barely recognize them through their disfigurement.

The position of Bangladesh in the division of labour of globalism today is not to clothe the nakedness of the world, but to provide it with limitless cheap garments. The workers are disposable, rags of humanity, as it were, used up like any other raw material in the cause of production for export. Dhaka is criss-crossed with vehicles stamped in red with the words ‘On Emergency Export Duty,’ as though it were the highest priority of Bangladesh to send out of the country as quickly as possible all it can produce.

The Song of the Shirt: Cheap Clothes Across Continents and Centuries
By Jeremy Seabrook
$27.95, paperback, 288pp.
Fernwood Publishing, April 2015

Jeremy Seabrook was born in Northampton, England in 1939. Early on in his career, he was both a teacher and a social worker. During this time he was also a lecturer for the Workers’ Educational Association and the Working Men’s College. He became an associate honorary fellow at the University of Bradford’s Department of Peace Studies 1995 to 1998 and an associate at the Institute of Race Relations, UK, from 2004 onwards.