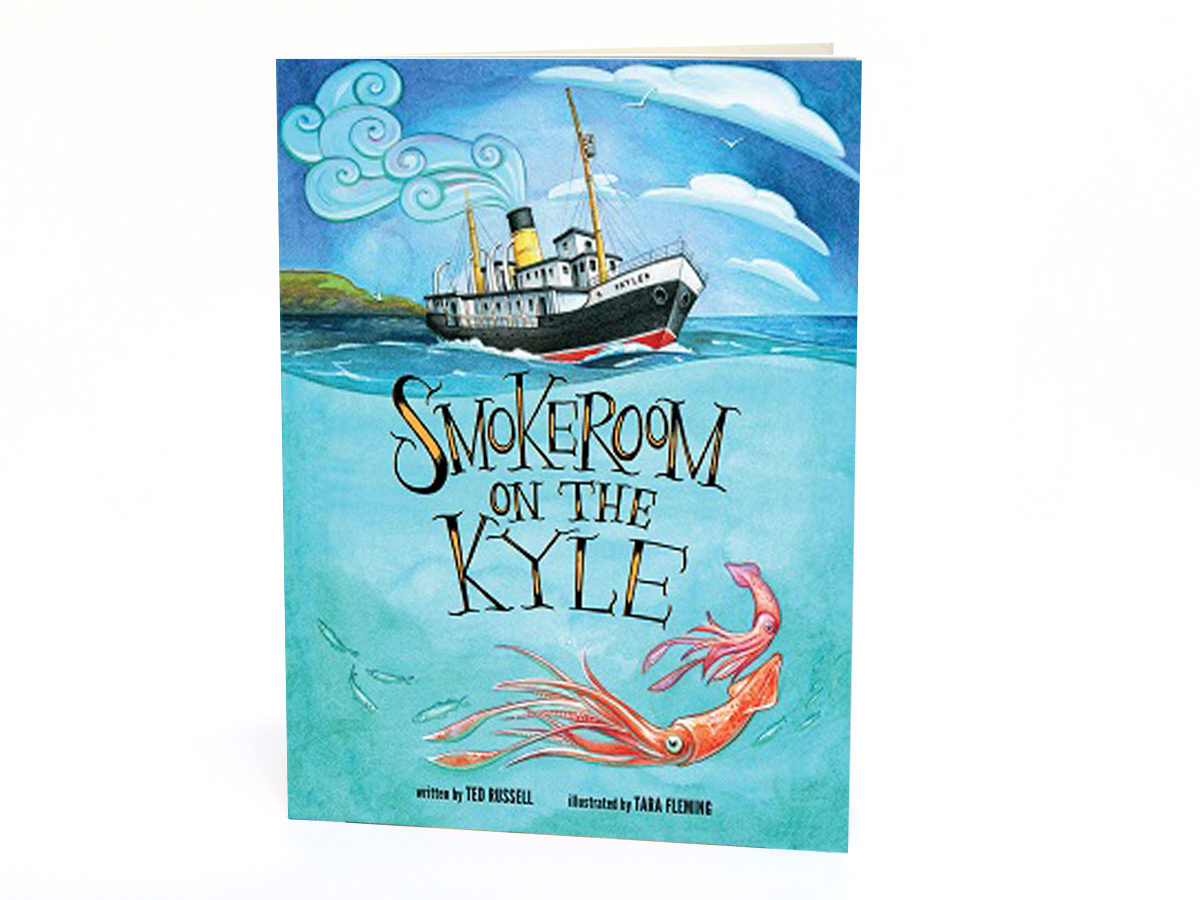 Tall are the tales that fishermen tell when summer’s work is done, / Of fish they’ve caught and birds they’ve shot, and crazy risks they’ve run.

So begins and ends Ted Russell’s classic, Smokeroom on the Kyle. I have only ever experienced this poem at kitchen parties and in friends’ living rooms, performed by and for adults, so it is a treat to see it come alive through illustration.

As a traditionally recited poem, Smokeroom on the Kyle lends itself easily to adaptation as an illustrated book for children, since it is most enjoyable when read aloud. Russell’s story draws the listener in right away. We’re sitting in the smokeroom of a ship that would one day be the last of Newfoundland’s famous Alphabet Fleet to remain in the province. The men are telling tales that get taller with every turn until our attention is drawn to Grampa Walcott, quietly listening in the corner. He agrees to spin a yarn from Pigeon Inlet, and what a yarn is it! Claiming it to be true, he shares a memory from his youth about squid jigging on a grand scale.

Walcott uses words once common to the Newfoundland vernacular, like bedlamer, caplin scull and grump. The context makes the meanings of most of these words accessible, but for clarity’s sake there is a glossary at the end of the book. Grampa also works a geography lesson into his story, mentioning outport communities on the Northern Peninsula of the island and the coast of Labrador: Hartley’s Harbour, Quirpon and Forteau. Tara Fleming accompanies the narrator’s words with a map of the region.

Fleming’s artwork is vibrant and playful. Children will enjoy matching the words to the items in the pictures and will be entertained by the action and gaiety that she captures.

This book is aimed at children but is a welcome addition to any adult’s collection for its historical and cultural significance and its rich watercolour illustrations capturing traditional Newfoundland outport life. It is the perfect gift for homesick expats, especially those with young children. Smokeroom on the Kyle now holds sacred space on my shelf, right next to a well-worn copy of Down by Jim Long’s Stage.

Tracy O'Brien is a graduate student in English Literature at Memorial University of Newfoundland. She freelances as a theatre, fiction, and poetry reviewer, and has published a number of articles and short fiction.