Wildflowers and subtle acts of kindness 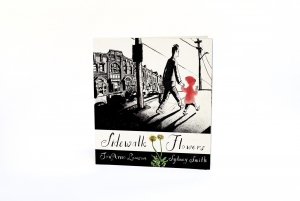 A girl in a red coat accompanies her father on errands through grey city streets. During this dull, passive task, she notices and collects wildflowers and shares them.

Sidewalk Flowers is a wordless picture book poem “written” by award-winning poet, JonArno Lawson. In an interview with Roger Sutton, Horn Book’s editor-in-chief, Lawson says he expressed his ideas through sketches and notes to illustrator, Sydney Smith, who then incorporated his own experiences of Toronto city streets – particularly Bathurst Street and bits of Chinatown – with his imaginings.

Using panels, full, and double-page spreads, Smith starts with small touches of colour, such as the red of the coat, and the yellow of wildflowers that grow out of the sidewalk. As the girl collects a bouquet, her father – always within view – is focused on things outside the scene, such as having a conversation on his phone. Smith continues to saturate the illustrations as the girl gives her flowers away: to a dead bird, a sleeping – perhaps homeless – man, a friendly dog, and family members. Now in a world of colour, she saves and places a single flower behind her ear, and kids will feel the joy in keeping a bit of kindness for themselves.

Sidewalk Flowers is a subtle story of attentiveness and responsiveness, about noticing, sharing, and delighting in little things. It invites discussion on topics like death, homelessness, cultural diversity, kindness, and mindfulness.

This review was reprinted under a Creative Commons License. Courtesy of the National Reading Campaign.

Jen Bailey teaches in the Professional Writing Program at Algonquin College, Ottawa. She holds an MFA in Writing from VCFA, and writes for children and young adults.