Renowned Mi’kmaw artist Alan Syliboy has three books due this season from Nimbus Publishing: a board book, Mi’kmaw Animals, in both Mi’kmaw and English; a new Mi’kmaw and English edition of The Thundermaker; and Humpback Whale Journal. Alan Syliboy’s luminous illustrations draw on the petroglyph tradition, which, in combination with his own vibrant colour palette and strong design sense, result in works that dance with story and meaning. Prince Edward Island’s poet laureate, Deirdre Kessler, spoke with Syliboy about the art of story and the story of art. 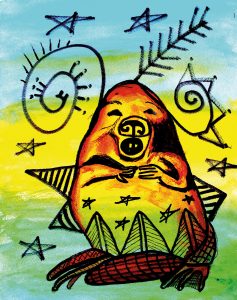 Deirdre Kessler: Why do you consider it important to have your books published in both Mi’kmaw and English?

Alan Syliboy: One way to support the language initiative with children is to put books in their hands, to bring them our stories and culture through books. This is an opportunity to change things with young people. Sometimes I am recognized on the street by Grade Two children! They have read or their teachers have read them The Thundermaker.

Deirdre Kessler: You have spoken in other interviews, such as one with Cheryl Bell in BILLIE magazine, about the influence of petroglyphs on your work and also how you recognize differences among Passamaquoddy, Maliseet and Mi’kmaw petroglyphs. What are some of these differences?

Alan Syliboy: All these neighbouring tribes use the double-curve design in their petroglyphs. All these tribes are close relations—we’re from the same stock, the same roots, but in Mi’kmaw rock art there are more spirals, the curl is more prominent. When I had my first real art lessons, years and years ago, with Shirley Bear, Shirley introduced me to Marion Robertson’s book, Rock Drawings of the Micmac Indians [published by the Nova Scotia Museum, 1973]. Petroglyphs became the way I learned about my own culture. I don’t have a copy of the book any longer and it’s out of print now, but I have the book in my hard drive.

Deirdre Kessler: What other artistic traditions inform your work?

Alan Syliboy: I keep away from other traditions. I like Miró and Klee and Kandinsky, but I don’t spend time studying them. I want to stay in my lane—I want to go down my own road. I’m not trying to incorporate other traditions.

Deirdre Kessler: How are art and storytelling connected in your work?

Alan Syliboy: Storytelling is not my focus. I am concerned with making a good picture. I developed the skill part many years ago when I was not working with colour. I worked only with pencil and

charcoal for many years. When I finally got a studio and turned from black and white to colour, I had established my ability with design and how to balance a page. I was prepared for colour. It was easy to add colour, and it’s one of my strengths: I’m a colourist. I experimented with contrast and colour for years in the studio.

Deirdre Kessler: Your work is known nationally and internationally as well as in our Atlantic region. What is the significance of your work in our region?

Alan Syliboy: When I started as an artist there were no well-established Mi’kmaw artists in the region. When Shirley Bear and I got together and found the petroglyph book, we then both had purpose. We wanted to do what was important to our culture. We educated ourselves and in the process we educated Mi’kmaw people. Very little was known about our culture. The Mi’kmaw culture is now accepted and Mi’kmaw design now thrives.

Deirdre Kessler: What was your response to the recent matter of the removal of the statue of Edward Cornwallis from a south-end square Halifax?

Alan Syliboy: The removal of the statue symbolizes a process of incredible advances in being Mi’kmaq. Momentum dragged the Cornwallis question along with it for years. When I was in school, we Mi’kmaq were invisible. Now we are visible. The obvious question around Cornwallis had to be answered. That’s a reality that can’t be ignored any more. It’s just the start. We have more texture now; we are more dimensional now to the dominant culture. We now interact with the dominant culture.

Deirdre Kessler: Do you have any last words? Is there anything I haven’t asked that you’d like to speak to?

Alan Syliboy: I feel it’s a good idea to have books in both languages in the hands of children. I feel secure in the future that we Mi’kmaw will be seen as real, multi-dimensional human beings. That’s what I’m happy about: the new generation of Mi’maw learning about our own culture. 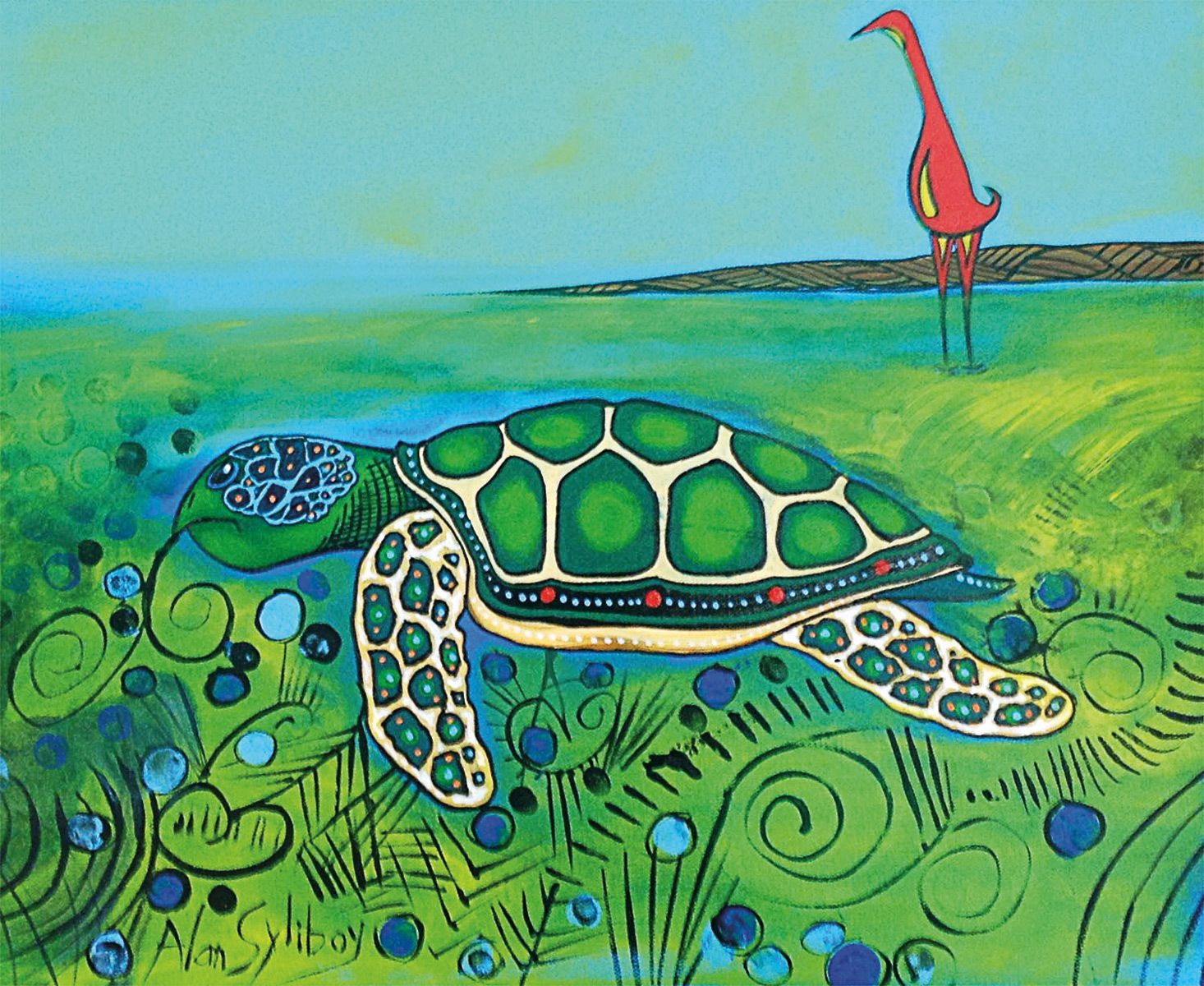