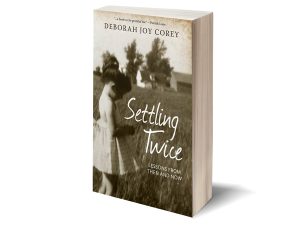 Born and raised in rural New Brunswick, author Deborah Joy Corey has now spent the majority of her life in the United States, with regular returns to Canada. For her, the border between the two countries leads from one home to the next.

“In so many ways,” she writes towards the end of her evocative new memoir, Settling Twice: Lessons From Then and Now, “Maine is New Brunswick’s twin sister. They line up together, shoring each other like siblings. Like the settlers that landed in Castine in 1773, believing they were in Canada, I often think I am in Canada as well.”

In fact the first section of the book is set in the present, where the launching of a neighbour’s boat introduces us to Corey’s life in Castine, a small coastal village in Maine. She and her husband, two daughters and a poodle named Max, “a miniature apricot posed like a Shakespearean lion in a bleaching splash of sunlight,” have recently moved into a sail loft, which is to be their home for the summer. It is a Maritime world all right, full of sailboats, commercial vessels, dories, “glossy emerald seaweed,” cormorants and seagulls, and the smell of “morning sea musk.”

The writing in the first section of the book is assured. It also gracefully raises a major theme, the deaths of her parents. While the separate passages are neither premature nor unexpected, their aftermaths still tilt the world ever after for Corey, as parental deaths do for so many. The father’s death, she says, was “as powerful and physical as the most hostile Maine winter.” To heal, she seeks out the beaches of Maine and those of sunnier climes, where the warmth coaxes her tears, “the way the sun coaxes water from the earth.” Six years later, the mother’s death comes, along with the belated realization for Corey that she, the adult daughter, is still “… not ready to be without her mother’s … intent gaze, her intuition, her instructions, her prayers.”

Despite the importance of both settings and themes in section one, for me, Settling Twice settles into top cruising gear on page 65, which is chapter one of the second section of the book. (The book has three sections, for which a table of contents and titled sections and/or chapters would have served well. I was often confused about the timeline in the author’s life.) On that page, I was rewarded with a wrenching, mesmerizing story that could have been titled “Pony,” the name Corey uses for her small equine friend. This masterful offering shares the stolen adventures of a girl and a pony from a dusty summer long ago. The writing is exquisite, the invitation into childhood terrain irresistible.

While this story is my favourite, it is from that point on that Corey shows her full command of the memoir form. Death scenes; unexpected violence; near-catastrophes; sibling friendships and their evolutions; addictions; our human ties to different, sometimes mirroring landscapes; the gift and menace of the natural world; the wonder of our remembered child-hearts and the staggering blows these receive–Corey handles all these subjects and more with grace and precision.

“Imagine,” Corey’s mother often remarked about the Loyalists’ journey from the Penobscot River in Maine to the St Croix River in New Brunswick, “moving your whole life on a ship. What a job. Those poor women having to settle twice.” (italics mine)

Years later, Corey thinks on her love of place and family. Of her daughters, during that same soft summer that begins the book, she writes, “Their sleeping faces beckon me, their gardenia musk is a breath of necessary absolution. They hold my story, my two selves. They are my sweet settling twice.” For some, and for Corey, certainly, the complicated interactions of geography and spirit are rich fishing grounds for life, and writing.