Setting, style and story combine to pull readers in 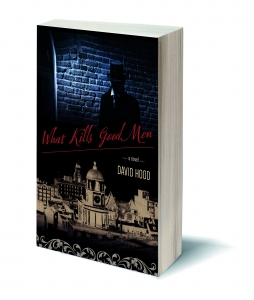 The year is 1899. A local politician is discovered dead in Halifax Harbour. Assigned to find those responsible are Chief Inspector Culligan Baxter, a straight-arrow, and Kenny Squire, a new police recruit brought in by circumstance.

In What Kills Good Men, David Hood wields his Haligonian knowledge proudly by crafting a setting immediately recognizable by Atlantic readers. The choice of his timeline is striking: Halifax is a city still finding its identity, crime is rife, and police work relies on the prowess of the men who fill the force’s ranks.

Hood holds true to the detective formula while crafting a story entirely his own. Through the protagonists, readers quickly learn the demands of late-Victorian-era detective work. Hood skillfully builds a layered, complex mystery novel, teeming with a gallery of memorable characters. His writing is vivid and absorbing, and his style well-suited to the time period. What Kills Good Men builds upon momentum and it’s well worth the wait.

Carey Bray is an award-winning Halifax poet and author. He is currently exploring freelance writing, having done interviews and reviews for The Coast and Hello Dartmouth. He also enjoys painting, Canadian fiction, and acting in local theatre.