The journey of telling the story of Jennifer Hicks and her daughters in Colleen Lewis’ book, Mr. Big

With my video camera on my shoulder, and a tripod tucked under my arm, I made the four-story climb to Jennifer Hicks’ apartment.

I wasn’t sure what to expect. It had been five years since her ex-husband, Nelson Hart, had been sentenced in the drowning deaths of their daughters. Prior to this summer day in 2013, I had only known her as Jennifer Hart, the wife who believed her husband’s version of the events and stood beside her mother-in-law throughout the trial.

But my visit to Jennifer’s apartment that day would change my perspective entirely.

Inside, there were pictures of Karen and Krista on every wall. Some were originals and others had been enhanced with hearts, angels and poems in memory. As I sat with Jennifer, she nervously clutched a piece of paper in her hand. The letter explained the Supreme Court appeal could result in Hart’s release from custody and she wanted to make sure he didn’t come back to Gander. The Jennifer before me was not the one I had seen in the courtroom for all those weeks.

She was stronger. She was angry, and I knew instantly she was about to add to this already complex story.

Jennifer began by pulling several big plastic storage tubs from a spare room. Piece by piece, she showed me everything she had left of her daughters.

And through the tears, a story of abuse and neglect emerged. She explained that she no longer believed her ex-husband’s version of the events at Gander Lake. She couldn’t fully explain why she had stayed in her marriage, even at the cost of losing her own family, but she stayed. And now she wanted to make things right. 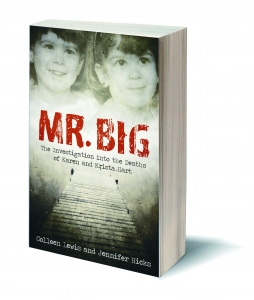 As I sat editing my piece for the NTV evening news, I knew there was no way to explain everything in a two-minute time slot.

But it wouldn’t be until the summer of 2014 that I would make the decision to tell the story in its entirety.

I admit, however, having a co-author made me nervous in the beginning. But as we progressed, I realized it was an ideal situation. Although I cried along with Jennifer many days, she was indeed the interviewee. I continued to work as a journalist, cross-referencing much of her story with the evidence obtained through social workers, the police and the testimonies of various family members involved.

While she fought for justice, I brought objectivity to the table without turning it into just another news story. For me, the final product had to be different than news, and more reader-friendly than simply presenting the evidence through the eyes of the Crown and Defense. My immediate goal was to strip the entire story down to a point where people could relate to it on a personal level.

Of course, a narrative was the ultimate way to get there, and there were many occasions when including dialogue made the job tougher, but I’m so glad today that I chose this style.

The reward has been hearing from people who say they get it now. They understand a little more about the intricacies as to why Jennifer stayed with her husband, and they also realize why the Mr. Big confession was deemed unreliable.

Many of us remember where we were when we first heard the story of Karen and Krista’s drowning. It is not only an important part of our province’s history, but the children were loved by many — especially the people of Gander, NL, who knew them well and supported them on several occasions in their short lives.

It’s been an honour to tell Karen and Krista’s story.

Mr. Big: The Investigation into the Deaths of Karen and Krista Hart
by Colleen Lewis and Jennifer Hicks
$19.95, paperback, 225 pp.
Flanker Press, 2015

Colleen Lewis spent her early years in Rocky Harbour and grew up in Deer Lake. She spent several years as a print reporter, and for the past 12 years she has been a video journalist with NTV.