Scars and Other Stories: Eyeing Fine Details Without Getting Bogged Down 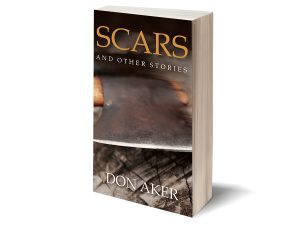 Scars and Other Stories is Don Aker’s first book for adults–published 30 years into a career in which he has produced nearly two-dozen books for young readers.

The 20 stories in the book were written between 1989 and 2016. Although the stories span three decades, they don’t represent the linear progression of a writer’s development. The book starts strong and the stories feel like one integral body of work.

The opening story is “The Invitation”–the piece that launched Aker’s career, winning him an award in the Atlantic Writing Competition and a $10,000 grant. It sets the tone for much of the rest of the book, with its carefully told story of a boy in 1960s small-town Nova Scotia who faces a choice between going to an unpopular new kid’s birthday party (knowing he’ll likely be the only one there) and watching the aftermath of the Kennedy assassination on the only colour TV in town. You can guess what he decides–but the choice comes with a heavy emotional cost.

Many of these pieces feature people feeling paralyzed or trapped–a man whose out-of-control anger has cost him his marriage, and who desperately hopes to win back his ex even while continuing to resent her; a widower who is descending into dementia without recognizing it; a skeptical, tightly controlled woman who visits an unusual Tarot-card reader. Aker renders their dilemmas compassionately, depicting the inner workings of their minds and capturing the telling details in their surroundings.

But he remains strongest in writing that features children and young people. Although a number of these stories are set in the past in rural Nova Scotia, there is no nostalgia here. Instead, Aker depicts the casual brutality of school and, frequently, a sense of dread and immediate or impending violence. In the title story, which he has said is largely autobiographical, a boy is inadvertently hit in the head with an axe by his father and then has to deal with the harder blow of realizing just how little his dad cares.

There are also moments of humour–in particular the laugh-out-loud story “Playing Pool,” which will ring true to anyone fumbling around with a household project.

Scars and Other Stories shows a writer with a careful eye for details, but who doesn’t get bogged down in them or let them detract from the emotional core of his stories.