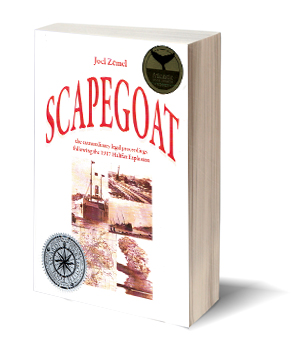 The devastating explosion on Dec. 6, 1917, following the collision of the French munitions ship SS Mont Blanc and the Belgian relief vessel SS Imo in Halifax Harbour killed nearly 2,000 people, injured thousands more, and destroyed much of the city’s North End. Nearly a century later, all aspects of this catastrophe continue to fascinate the reading public. Joel Zemel, a musician and filmmaker turned historical researcher, began studying the Explosion in 2009 when he encountered a photograph of the blast and attempted to establish the location from which it had been taken. This led him to explore more deeply the causes of the disaster, particularly the part played in it by Acting Cmdr. F. Evan Wyatt of the Royal Canadian Navy, who was responsible for controlling ship traffic in the harbour.

Zemel’s focus is on the inquiry, which began hearings only a week after the event, against a background of outrage and a clamour to hold someone responsible. Presided over by Justice Arthur Drysdale, who seems to have made up his mind before hearing the evidence, the proceedings of “the Drysdale Inquiry” were  a travesty of justice. On Feb. 4, 1918, Drysdale filed a one-page decision attributing sole responsibility for the disaster to Aimé Le Médec, captain of the Mont Blanc, and Francis Mackey, the ship’s pilot. He also severely censured Acting Cmdr. Wyatt for negligence.

Le Médec, Mackey and Wyatt were then charged with manslaughter. Only Wyatt, however, was brought to trial. Justice Benjamin Russell, who had earlier defied public opinion by ordering the charges against Le Médec and Mackey to be dropped, instructed the jury that the prosecution had no case and Wyatt was acquitted quickly. Although Mackey and Le Médec were able to resume their careers, Wyatt, the “scapegoat,” was dismissed from the Royal Canadian Navy with his career and reputation in ruins.

Meanwhile the owners of the two ships sued each other for damages of $2 million, a large sum in 1918. The case eventually reached the Judicial Committee of the Privy Council in London, then the final court of appeal in the British Empire, which found both ships equally responsible in 1920.

The legal proceedings following the Halifax Explosion have been the subject of a number of books and articles by Janet Kitz, John Griffith Armstrong, the late Donald A. Kerr, QC, and others. Zemel, however, has unearthed new information about Wyatt’s background, his relations with his naval superiors, and his life after his trial. Loaded, perhaps overloaded, with information, Scapegoat will appeal to those eager to know more about the explosion and its aftermath.

Henry Roper is a retired University of King’s College humanities professor and past president of the Royal Nova Scotia Historical Society. He co-edited volumes 3 and 4 of the Collected Works of George Grant (U of T Press).