Samuel Holland: His Work and Legacy on Prince Edward Island 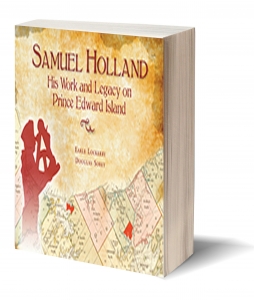 It took place 250 years ago: an event that would directly and indirectly shape Prince Edward Island and its settlement, its land, its people and its politics. It would etch itself upon the landscape of the Island, determining the boundaries of counties, townships, farms and fence lines, as well as the locations and orientations of the roads. It would play a role in the development of the colony and Province, and of the life of its people to this very day, and will continue to do so for the indefinite future.

What happened 250 years ago would kick off a decade of work and achievement that affected not only the Island itself, but also a vast part of the North American continent. This monumental event was the completion of Samuel Holland’s survey and map of Prince Edward Island in 1765. In 2015 Prince Edward Islanders have good reason to celebrate and commemorate the 250th anniversary of Holland’s achievement. And people everywhere can rightly recognize Prince Edward Island as not just the cradle of Canadian confederation, but also the cradle of the most extensive and accurate survey and mapping program that had ever been conducted in the British Empire, if not the world.

The accolades that have been bestowed upon Samuel Holland as a surveyor and cartographer are legion. One historian has termed him “one of the two greatest surveyors of the age” (the other being Captain James Cook, who had his initial training from Holland), and “one of the leading astronomers” in North America.[i] Even before Holland began his General Survey of 1764 to 1775, which would bring him singular recognition in the annals of surveying, he was “arguably the most qualified surveyor in the British army, certainly among those in North America.”[ii]

On his large map Holland named more than 200 bays, rivers, points, capes and coves on St. John’s Island [Prince Edward Island]. Almost half of these names are still used. They may be only vaguely aware of it, but contemporary Islanders’ sense of community and place links to the names that Holland applied to a map 250 years ago. There was nothing haphazard about Holland’s place naming. The patterns and purposefulness inherent in his choices become apparent in Samuel Holland: His Work and Legacy in Prince Edward Island .

A competent soldier and military officer, Samuel Holland excelled as an astronomer, surveyor and cartographer and was at the forefront of these scientific disciplines. His surveys and maps were cutting-edge at the time and, because of their accuracy, retained their utility for many decades.[iii] Holland’s place in history is assured through having so well accomplished what was then “by far the largest survey ever conducted by the British.”

Nowhere else has his work had such a pervasive and lasting impact, or his name been so well remembered, as they have on this Island. Samuel Holland: His Work and Legacy in Prince Edward Island tells the story of how this has come about.

[iii] Holland’s maps and their derivatives held sway until in the mid-19th century when maps based on the survey of Henry Wolsey Bayfield began to appear. His survey of Prince Edward Island was conducted in the 1840s. See The St. Lawrence Survey Journals of Captain Henry Wolsey Bayfield 1829-1853, Vol. 2 in particular; Boulton, “Paper on Captain Bayfield,” 25-95.

Earle Lockerby and Douglas Sobey MORE ARTICLES FROM THIS CONTRIBUTOR