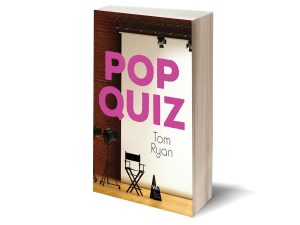 Getting to be part of the cast of a fairly long-running cable TV show with a loyal following is a pretty sweet deal for 15-year-old Aiden. While he knows that Pop Quiz, a high school teen drama, isn’t exactly a world-famous production, he is proud to be part of the current cast. Even though it means he spends his whole summer filming the next season, it’s an enviable part-time job.

Aiden also enjoys the camaraderie with his fellow cast members and is pumped when he finds out his character is slated to take on a more prominent role in the next season. He is also psyched that the romance storyline between he and Anais’s character is going to be more fully developed.

However, his excitement is shortlived, since they soon discover that the show is being dropped. Ratings are down and it seems that young people don’t watch TV any more. As Aiden and his friends process this news, they begin to formulate a plan to give Pop Quiz one last blaze of glory.

This latest entry in Orca Books’ Limelight series highlights the behind-the-scenes workings of a typical TV series. In this book, Aiden points out all the work that goes into bringing even a modest TV series to the screen, how many people it takes to film each scene, each with their own particular part to play. He also recognizes that even Pop Quiz’s biggest stars rarely go on to become world-renowned actors and actresses.

Whatever the future might hold, he still believes the show and its stars, past and present, deserve a proper finale. He and his friends come up with a creative and realistic proposal.

Aiden is a likeable protagonist who learns some valuable life lessons while also displaying tenacity and heart. The secondary characters are also winsome and readers will root for them to succeed.