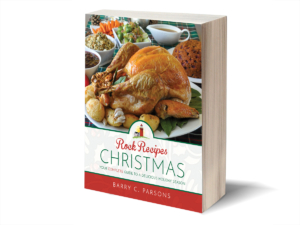 The holidays in December are rooted in nostalgia, but perhaps none as strong as the desire to re-live flavours of holidays past: a mother’s baked good, a relative’s version of a holiday favourite. It’s like every year our taste buds are stuck in December mode and there are very particular things that please us. We want only those very particular things. Nostalgia is personal and occasionally regional.

In the case of Barry C Parsons’ Rock Recipes Christmas, the blogger from the Rock doles out a menu that tends to live quite comfortably in the past. That’s the thing about nostalgia – it doesn’t give a damn about updates or contemporary versions and visions. It wants things done the way they were always done, from recipe to ingredients.

This is especially true in the copious baking section of the book, littered with recipes that feature enough glacé and dried fruits to give you diabetes by the 12th day of Christmas. But it makes sense to have such an abundance of sugared staples in your pantry – historically much of the food sent to Newfoundland was preserved in one way or another and the need to be inventive was strong.

If I have one criticism for this book, it is that I wish there was a greater depth and breadth of knowledge surrounding the origins of many of these recipes. Familial notes bring a solid introduction but recipes like these deserve a greater history lesson.

Then again, this is easily forgiven, since the book includes recipes for Newfoundland dressing (stuffing) as well as a steamed patridgeberry (lingonberry) duff. Now, if you’ll excuse me, I’ll be stuffing my face with Tweed Squares.