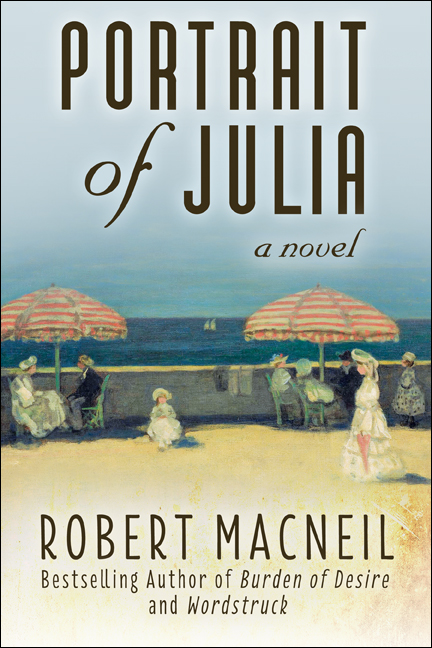 Julia Robertson is a beautiful young war widow living in Halifax in the 1920’s. New ideas about literature, art and music are emerging during this era, as are new attitudes about sexual awareness for women. Eager to start a new life, Julia travels to Europe where her friendship with famous artists helps form her future. Perfect for bookclubs, this fascinating tale of romance and art against the backdrop of societal change will provoke animated discussions.

Leaving behind the stuffy world of Halifax, Julia goes to London and Paris and then the South of France where she renews her close friendship with one of the great Canadian painters, J.W. Morrice. She becomes part of Morrice’s circle of artists and admirers, among them Henri Matisse.

Torn between the man she trusts and the man with whom she’s passionately infatuated, ultimately Julia has to resolve a dilemma that dramatically tests all her progressive ideas.

With this novel Robert MacNeil returns to a character who first appears in his bestselling novel set at the time of the Halifax Explosion, Burden of Desire. “Julia’s appetite for life and her bold embrace of the modern world was so vivid to me that I had to follow her life into the postwar world,” says MacNeil. The result is a captivating story of a woman testing the limits of her world.

Robert MacNeil grew up in Halifax and, after early work as a CBC announcer, he was a journalist for 40 years with Reuters, NBC News and the BBC, culminating in twenty years on MacNeil-Lehrer NewsHour on PBS. He is also the author of three memoirs and three novels. He divides his time between New York and Nova Scotia.

Click here to read an excerpt from Portrait of Julia