A rich ride through Newfoundland with artist Christopher Pratt 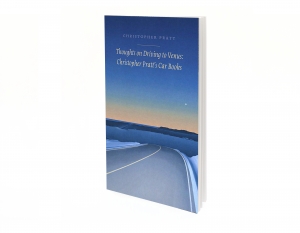 It’s a rich ride to accompany painter and print maker Christopher Pratt as he jots responses to weather, landscape, wildlife and more while he’s driven around Newfoundland ­– mostly the Burgeo Road, west coast, and northern peninsula.

Those selected entries from his car books kept between 1999 and 2014 are sometimes just fragments or lists. Pratt says these are meant to be impressions but impressionism is perhaps better heard in music or viewed in visual arts; the reader needs more. We get that in occasional passages of lovely writing: “There is a maturity about August, a sophistication… it lacks the lingering adolescence of June, the assertive nouveau riche of mid-July, the visual pyrotechnics of September.”

The voice is strong and often playful as the writer dots his thoughts with myriad exclamation points. More rigor in the selection of entries and a cull of repetition (40-plus visits to Tim Hortons!), however, would have made a tighter book.

Note: Excerpts from Pratt’s car books were also included in the art book The Places I Go (Goose Lane Editions)

Marjorie Doyle’s latest book is A Doyle Reader: Writings from Home and Away.