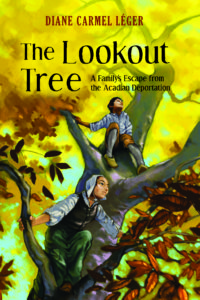 When young Fidèle discovers that the English have begun rounding up Acadians, he knows that he must warn his family and friends. They quickly realize they must leave their homes in search of safety. Fidèle, his sister Prémélia, their grandfather, Pétard, and the feisty widow Rosalie flee into the forest with their neighbours. However, maman and papa stay behind and are captured and imprisoned by the English and later deported to the Thirteen Colonies. Fidèle and his family hide out in the forest, hoping that maman and papa will find a way to escape, and then just wanting the war to be over so that they can go back home. Life in hiding is hard, and Fidèle becomes determined to join the rebels who seek to rescue the deported Acadians. Pétard is afraid to lose Fidèle as well, but how long can they go on living this way?

While young readers may be familiar with the details of the Deportation of the Acadians in 1755, native New Brunswicker Diane Léger’s account of this family’s ordeal puts a personal face on the terrible event and provides a thoughtful depiction of what it meant to those affected: the initial shock and disbelief; the confusion, fear and anguish as families were separated; the feelings of betrayal and sadness at the incredible injustice of it all. She also highlights the support they received from Mi’kmaw friends who were themselves all too familiar with the scenario of being hunted by English soldiers. A very accessible account that humanizes this particular piece of Canadian history. ■