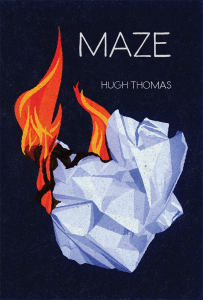 As a poet and mathematician, Hugh Thomas’ work has led him around the world, and his international, multilingual outlook is a clear influence in Maze. In his new poetry collection, Thomas sets out to translate the works of other poets, both contemporary and historical, into English. The only obstacle is his inability to speak the languages of these poets. However, he doesn’t let this setback stand in his way. While his Spanish, Norwegian and Ancient Greek might need some work, Thomas is fluent in the language of poetry.

Thomas doesn’t so much translate these poems in a literal sense, but instead tries to capture the poetry in what he thinks the works mean, using the flow and the sounds of these foreign texts to guide him, not a dictionary.

Some of the interpretations Thomas presents us with include a fresh take on Federico García Lorca’s “La guitarra” entitled “The Guitarist,” artful selections from foreign-language dictionaries, a phonetic take on some Sapphic verse, and even an attempt to translate Norwegian and Catalan versions of English poems back into English.

With his sentimental, figurative adaptations of foreign-language poetry, Hugh Thomas shows himself to be a pioneer in the field of what can only be described as “abstract translating.”

The 65 poems that make up Maze deal with an array of themes and subjects, most notably observations that Thomas has made while abroad. Despite the alien origins of more than half of these poems, they read like original works that differ greatly from the source material. It’s not until the end of the text that Thomas cites his “sources,” which allows the content of Maze to stand on its own merits.

Hugh Thomas’ Maze is sure to find a grateful audience in poetry enthusiasts who consider themselves “of the world,” and language lovers alike.