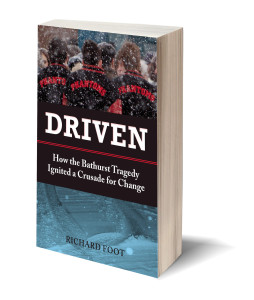 Richard Foot has reconstructed one of the most dramatic Canadian news stories of the past decade.

Parents will shed tears over this book. Far more importantly and impressively, Foot pays full tribute to parental suffering while retracing the steps that followedâ€”walked by the mothers of boys who died violently, unnecessarily, in a highway collision.

It is that adverbâ€”â€œunnecessarilyâ€â€”that is surprising. It is understandable if grief throws a mother into denial about the nature of her sonâ€™s death. But the mothers Foot writes of proved that such tragedies are preventable, with the help of longsighted safety policies that are properly followed.

Foot outlines an anatomy of change and details how some, when afflicted by loss, can change the worldâ€”making a correction not to undo the past, but rather prevent the repetition of history.

Its one minor flaw is its excessive repetition of key points. But the writing is strong. Driven is moving, informative and inspiring.

Driven: How the Bathurst Tragedy Ignited a Crusade for Change
by Richard Foot
Goose Lane, October 2013