Review: Beyond the Trees 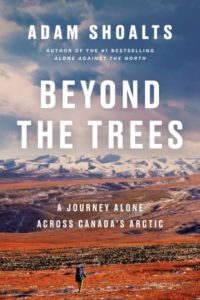 When reading Beyond the Trees, one gets the impression of author Adam Shoalts as a kind of Jack Kerouac meets Jack Reacher: an obsessive wanderer at his calmest in the midst of catastrophe.

Beginning in Eagle Plains, Yukon, on May 28, 2017, Shoalts, now Explorer-in Residence with the Royal Canadian Geographical Society, spent nearly four months paddling and portaging through some of the most remote and challenging conditions imaginable, enduring run-ins with grizzly bears, chest-deep traverses in swollen Arctic rivers, and clouds of blackflies thick enough to draw blood from a stone.

I suppose it was a mad idea,” the Fenwick, Ontario-raised Shoalts writes of his near 4,000-kilometre solo trek across Canada’s Arctic, the inspiration for Beyond the Trees. Shoalts had set his sights on Baker Lake, Nunavut, a hamlet of 2,000 some three-hundred-twenty kilometres inland from the Hudson Bay. To get there, he would need to travel for miles against the current, beginning with the longest river in Canada: the mighty Mackenzie.

“At the time, I really wasn’t sure if I could pull it off,” he admitted to Atlantic Books Today. There were August snowstorms, ice floes and winds that bent tent poles like drinking straws.

It’s mesmerizing to be guided through Canada’s wilderness through Shoalts’ eyes. Behold, a mind that can identify spruce trees and sandpipers, muskox and mergansers. From Shoalts, one learns that sphagnum moss, with its naturally-occurring iodine, can be used for treating cuts; that caribou lichen can be boiled and eaten as emergency rations.

Shoalts also wields a wicked wit—important for any guide. Of a run-in with an overly-aggressive muskox, he jokes his first instinct was to shield his body with a life jacket: “Of course, the rational side of my brain was immediately dismissing this as nonsense.” In choosing to drink straight from lakes and rivers, he mentions that if he were to fall sick with giardia, his journey might end quite badly, “though perhaps well for medical science.”

But for all of Shoalts’ good humour and incredible wealth of knowledge, the question still remains: why do this trek alone? Why do it at all?

“I wanted to see the wilderness while it still exists,” he explained Atlantic Books Today. Still, one wishes he would offer more introspection.

At times throughout the book, Shoalts admits to feeling lonely, though he seldom lingers on the thought for longer than a paddle stroke. Even when he confesses to feeling demoralized—rare though the occasions may be—he tends to skate over the emotion, as if it were an inconvenience to the story and not part of the story itself. (Here, the Jack Reacher comparison returns.)

Beyond the Treesis a remarkable tale—and a staggering feat, no doubt. But it is largely a tale about adventure, and not the adventurer himself. Instead, it seems Shoalts counts upon his exploits to carry the book, where another author might dig within for meaning. (What is Wild without Cheryl Strayed’s confessions?)

Perhaps that is to be expected of a geographer and historian: stories about others come more easily. But one wishes for Shoalts’ full story—blemishes and all.

Martin Bauman's work has been featured on-air in Toronto, Vancouver, Calgary, Ottawa, Halifax, London, Waterloo Region, and overseas in Cardiff, Wales. His writing has also appeared in the Globe and Mail, Calgary Herald, Waterloo Region Record, and Canadian Mennonite, among other places.