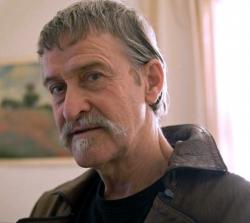 Ray authored 13 books of fiction, a memoir, two biographies (including the acclaimed life of light-heavyweight boxer, Yvon Durelle, The Fighting Fisherman), and six collections of poetry. He edited the anthology of Atlantic Canadian writers, East of Canada, and three literary magazines—Intercourse, Pottersfield Portfolio and The New Brunswick Reader.  Dozens of his poems and short stories have been featured in Canadian magazines as diverse as Canadian Forum and Weekend Magazine, and in many academic journals.  His poems, essays and stories have also been included in 16 North American anthologies.  He is a subject in several books and graduate theses.  A number of his stories and poems have been aired on CBC radio and television.  His play The Heart Sound was performed by Montreal’s St. Joseph’s Theatre Group.

Ray was born May 8, 1941, in Chatham, NB, son and third child of Ursula (Graham) Fraser and Robert Fraser. Besides his parents, he was pre-deceased by sisters Carmel (John Greatrix) and Helen.

He was educated in Chatham at St. Michael’s Academy, St. Thomas High School and St. Thomas University. As a youth, he was an athlete, playing both baseball and hockey. In university, he played with the acclaimed St. Thomas Tommies, always one of his happy memories. In later years, he was also a golfer, a cyclist and an enthusiastic walker. Throughout his life, he’s been a dedicated spectator of hockey, baseball and, more recently, basketball.

Ray’s muse claimed him early and he knew from a young age that he would spend his life telling stories, through poetry, novels and short stories. When he graduated from St. Thomas, he taught high school for a year in Bellisle, NB, and then moved to Montreal where he became immersed in the literary scene that was active in the city in the ’60s.

For a paycheque, he worked for a number of years as an editor, chief staff writer and freelance writer for the tabloid newspapers, among them, Midnight, which survives today on supermarket shelves as the Globe.

In 1971, Ray and fellow authors Hugh Hood, John Metcalf, Clark Blaise and Ray Smith established The Montreal Story Tellers Fiction Performance Group, which did readings in high schools around the Island of Montreal.

During the ’70s, he and his then-spouse, Sharon, travelled in Europe, most extensively in Spain where they often stayed for lengthy visits.

Some of Ray’s happiest memories were of the times he spent aboard his converted fishing boat, Spanish Jack, plying the waters of his beloved Miramichi River and often anchoring at the mouth of the Black River, near the land and the elderly house that he later bought and where he and Sharon lived for a number of years.

He lived again in Fredericton, then in Paris and Montreal before returning to Fredericton where he settled permanently and did some of his most satisfying and prolific work. While in Fredericton, he mentored young aspiring writers as Writer-in-Residence at Fredericton High School.

As well as the Order of New Brunswick and the honorary degree, Ray was the recipient of New Brunswick’s inaugural Lieutenant-Governor’s Award for High Achievement in English-Language Literary Arts in 2009.  An earlier book, The Bannonbridge Musicians, was runner up for the 1978 Governor General’s Literary Award for Fiction.  In 2007, When the Earth Was Flat earned The Bernell MacDonald Prize as well as the Lion’s Head Best Book of the Year Award.  Five of his books are listed in the 2009 publication, Atlantic Canada’s 100 Greatest Books, a distinction shared by only three other authors.  This year he was awarded the Senate Sesquicentennial Medal.  Ray also received a Woodcock Grant from the Canadian Writers’ Trust, four Canada Council Grants and six New Brunswick Arts Branch Creation Grants.

Many thanks to the dedicated staff at the Hospice House in Fredericton and his medical care givers, to his loyal friends who spent time with him until the end, and to the organization that not only saved him but added value to a life well-lived. Ray joined Alcoholics Anonymous 35 years ago and never looked back. It added another dimension to his life and deepened his understanding of human nature.

Ray is survived by nieces Cheryl (Greatrix) Chase (Robin) and Nancy (Greatrix) Tremblay; nephews Mark Greatrix and David Greatrix; by his former spouse Sharon Fraser (Dan O’Connor); by long-time dear friend and supporter, Cynthia Losier; and by many friends, fans and readers, both near and far.

Sharon Fraser is a writer, editor and broadcaster in Halifax, Nova Scotia.