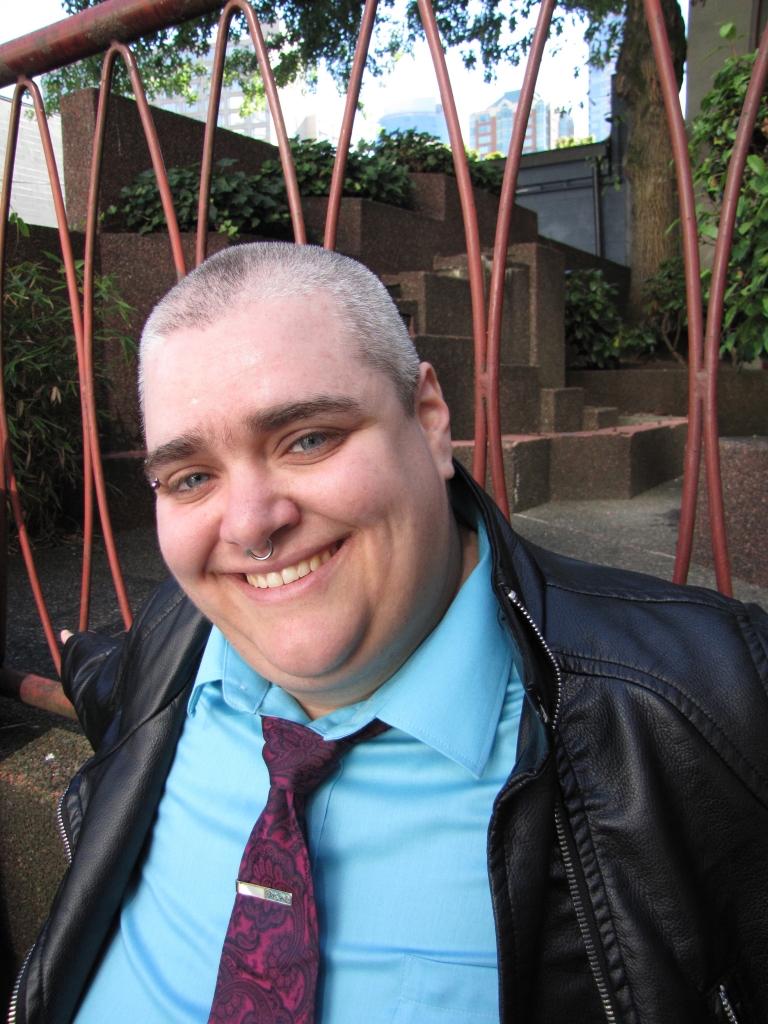 As a bi-coastal writer, originally from Kingston, NS, now based in Vancouver, Crawford is this year’s Canadian Women In Literary Arts critic-in-residence, and winner of the Robert Kroetsch Award for Innovative Poetry.

The prize includes publication with Invisible Publishing’s Snare imprint and a $500 book advance. Sideshow Concessions is both bearded lady and the world’s fattest man, and comes out in October.

“If I may be blunt, it makes me very happy that a genderqueer fatso from Nova Scotia who writes a lot of free verse can be read closely and taken seriously by the folks deciding such things,” says Crawford. “It is always reaffirming when the things you find interesting end up interesting other people. It also makes me hopeful that my students and other young people who are queer or trans will have some options ahead of them.”

“I try to create new ways to think about gender, bodies, memory, time, sex, connection and so on. I have been out as queer for a good long while now, and the word has often meant a lot. However, I do pause when I consider the question now; I am wary of getting attached to any one approach.”

In December, he’ll publish an academic collection of essays, Transgender Architectonics – The Shaping of Change in Modernist Space. Both his poetry and academic work take roots in his rural East Coast upbringing.

“Being working class; being aware of labour issues and class inequality from a very early age; developing an atheistic ‘catholic conscience’ and an anti-colonial ‘celtic soul;’ knowing early on that neither urbanism nor wealth neatly align with value or success; and, at the risk of sounding corny, knowing that earnestness and bigheartedness can coexist with intense critique and debate. I consider all of those things Nova Scotian gifts and I try my best to live up to them.”

As this year’s critic-in-residence with Canadian Women In Literary Arts, a national non-profit feminist literary organization that supports active female and genderqueer perspectives in Canadian literature, Crawford’s mission is to write reviews of transgender literature that makes people rethink what Trans Lit is, and what it could become.

Crawford’s critical and creative work speaks to fat politics, embodiment, gender and sexuality. His poems are political, humorous, unabashedly honest, and offer snapshots of complicated family dynamics, ex-lovers, new flames, and all relationships in-between. He is concerned with poetry’s ability to expose, and wonders if his rural family and intimate relationships may be affected by his no holds barred approach.

“I am aware that when one publishes poetry that could potentially be interpreted as personal, there is always the knowledge that one will, in a sense, lose interpretive control over one’s narrative, he says. “I am curious to know if that feeling would be painful, or freeing, or something else. Also, because nobody’s story is free from the stories of others, it would be understandable if a writer felt concerned about publishing candid texts; nobody wants their loved people to feel they’ve been Alanis Morissette’d.”