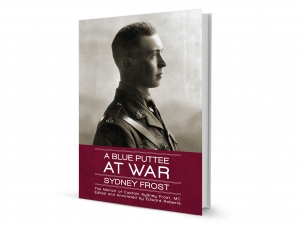 By all accounts, Sidney Frost was a remarkable individual.

The Yarmouth native began his banking career at his hometown branch of the Bank of Nova Scotia in 1908, was transferred to St. John’s, Newfoundland, in 1914 and rose to be the bank’s national president and chief executive officer in 1956. He joined the Newfoundland Regiment (later the Royal Newfoundland Regiment) as a private, only 17 days after Britain had declared war on Germany on Aug. 4, 1914, was commissioned in 1916 and later promoted captain.

Frost was awarded the Military Cross for gallantry and devotion to duty during the capture of Keiberg Ridge, Belgium, in September 1918. Throughout his wartime service, he recommended dozens of his soldiers for heroism. The most famous was Private Tommy Ricketts, who received the British Empire’s highest decoration for gallantry, the Victoria Cross. Ricketts, only 17 at the time, was the youngest combatant soldier ever to receive this prestigious medal.

Frost was also a keen observer of people and places and preserved abundant records of his wartime impressions. Several of his accounts of the Newfoundlanders’ First World War experiences were used by historian Col. Gerald Nicholson when he wrote the regiment’s official history—The Fighting Newfoundlander— in 1964, although generally without direct attribution.

Frost always intended that his full account of the war would only be for his family’s personal use. When his notes were “rediscovered” by his children after his death, they felt his writings were so important that they should be published. An agreement with Edward Roberts, a former lieutenant-governor of Newfoundland and Labrador (and ex-Honorary Colonel of the Royal Newfoundland Regiment), to edit Frost’s account to remove any material that might be objectionable was felt to have satisfied Frost’s strictures.

The result is an amazing first-hand account of the experiences of Frost and the Newfoundland Regiment during the First World War, some 100 years later during the centennial commemorations of that war. A Blue Puttee At War is a great read, as well as a personal wartime account and regimental history at its very best.