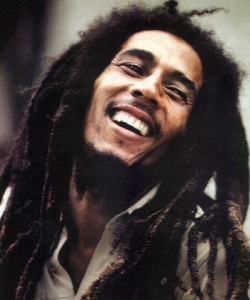 Writing The Hermit of Africville changed my life. Learning about Eddie Carvery’s now 45-year protest against the racism that destroyed his community opened my eyes and left a lot of questions.

What exactly is racism?

What exactly are the human races?

Those questions were the seeds Carvery planted in my mind. Now, they’re blossoming in a new book: Redemption Songs: How Bob Marley’s Nova Scotia Song Lights the Way Past Racism (Pottersfield Press, fall 2016).

It starts in the early 1600s with Samuel de Champlain hiring Mathieu da Costa as his vital fixer on his exploratory trip to New France, today’s Nova Scotia. While da Costa is now celebrated as the first Black person in Canada, the striking thing is that no one at the time remarked on that. He arrived here as Othello opened in London – and Shakespeare’s famous play about the Dark Moor likewise barely mentions that he’s Black. He’s culturally adrift in Europe, but not racially inferior.

Race had not yet been invented.

Leap ahead two centuries and watch as Boston King breaks free from slavery in the American Revolution and fights his way to liberty in Nova Scotia. By the time he arrives in Birchtown in the late 1700s, the world has changed and Black people are seen by Europeans as racially inferior. Black people are bought and sold in Halifax’s Parade Square. Newspapers run ads seeking escaped slaves.

As King joins an exodus of Nova Scotians leaving these shores for another new life in Sierra Leone, “Galloping” Richard Preston is born a slave behind American lines. He, too, shatters his chains and runs for freedom in Nova Scotia. Here, he spends his life galloping on horseback up, down and across this province, uniting African Nova Scotians for the first time with his Christian vision of equality.

Preston dies in 1861 but his work lives on. New waves of Black Nova Scotians bring new ideas about what having African roots means when people from the West Indies move to Cape Breton in the early 1900s to work in the coal mines. After centuries of enforced shame, these Black Nova Scotians introduce an idea that Black is beautiful, that Africa is a homeland to be proud of.

These ideas come from a Jamaican named Marcus Garvey, who declares himself the provisional president of Africa and takes his message of deep pride around the world. In Cape Breton, his expatriate countrymen and women join his Universal Negro Improvement Association, building a series of UNIA halls.

In 1937, Garvey visits these Nova Scotians in Sydney and in October delivers an extraordinary speech in which he tells

them, “We are going to emancipate ourselves from mental slavery because whilst others might free the body, none but ourselves can free the mind.”

He dies alone a few years later, war-stranded in London.

Forty years later another dying Jamaican studies Marcus Garvey’s work, seeking inspiration for one last song. Bob Marley is the world’s first Third World Superstar and in 1979 is at the peak of his earthly powers. He’s finished his Uprising album, but the studio says it needs one more song. It’ll be one of the last songs he ever writes.

Marley flips through a copy of Black Man magazine and sees the text from Garvey’s Sydney speech. He pauses on that powerful central message: “We are going to emancipate ourselves from mental slavery because whilst others might free the body, none but ourselves can free the mind.”

Marley has already discovered a deeper truth, one Garvey never knew: Africa is the homeland of all humanity. We can all find deep pride in our common origins.

Marley strums his acoustic guitar and creates a wistful, heartbreakingly hopeful sound. He hums, then sings before reaching the song’s central message: “Emancipate yourself from mental slavery/None but ourselves can free our minds.”

He finishes the song, finishes the album and goes out again into the world. He closes the main set of his last tour with his heartbreakingly hopeful Nova Scotia song: “Redemption Song.”

Nova Scotia inspired Marcus Garvey to deliver his message of liberation. Marley lifted those words into song and created one of humanity’s finest hymns. This fall, we’ll learn the full story for the first time in Redemption Songs: How Bob Marley’s Nova Scotia Song Lights the Way Past Racism.