Rebecca Rose had yet to utter a word when the jam-packed audience at the launch of her new book, Before The Parade, gave her a standing ovation. “I’m completely 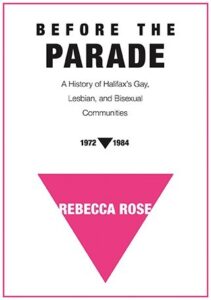 overwhelmed,” said Rose, 35, a native of Cape Breton, whose volume traces the history of Halifax’s gay, lesbian and bisexual communities from 1972 to 1984. “This is incredible,” she added, teary-eyed.

A long-time queer activist in Nova Scotia, Robin Metcalfe was among those who attended the gathering, earlier this year, at the Halifax Central library. Recalling the joyful atmosphere he later said: “It was a watershed event. I spoke with people I haven’t seen in a long time; in some cases, in decades. It’s undoubtedly the last time some of us will all be in the same room together.”

Before the Parade came to fruition after Metcalfe told Rose about Anne Fulton, a steadfast lesbian activist in Halifax whose 2015 death,  at age 64,  garnered scant media coverage.  To honour her memory, Rose, a self-described “young, queer femme,” wrote a profile of Fulton for The Coast,Halifax’s alternative weekly, and later, a longer piece for the paper about the evolution of the city’s LGBTQ community.

Deftly crafted from interviews, archival records, organization minutes, photographs and other gay-related documents, Rose’s engaging book stands as the first full-length account of LGBTQ activism in Nova Scotia. By design, the narrative stops just before the emergence of the AIDS crisis and thus serves as a template for future works about queer life in the province.

The author writes: “[Before the Parade] is a history of people finding each other in unlicensed gay clubs, in church basements, while cruising … and at house parties. … Of drag queens; of women in button down shirts and workboots; and of lots of disco and lots of sex. … of Black LGBTQ folks navigating mostly white spaces and making their own.”

Rose attributes the rise of queer activism in the province to the founding, in 1972, of the Nova Scotia Gay Alliance for Equality (GAE), which was organized by a group of working-class men and women. She cites as another milestone the establishment, the following year, of a volunteer-run gay hotline that provided information to the region’s then largely closeted queer (and questioning) population.

“There are people who owe their lives to the Gayline,” said Metcalfe, a former volunteer who is widely quoted in the volume. The hotline staffers were also subjected to terrifying bomb and death threats from callers outraged by the growing LGBTQ movement in Nova Scotia.

Undaunted by the haters, GAE opened, in 1976, The Turret, a popular Halifax gay bar and disco that was held in a former Church of England building (now a registered Historical Property known as The Khyber).

“It was a time of absolute freedom,” recalled Lorne Izzard, a gay Black man and regular patron at the soon iconic dance haunt. “‘We had our own club that was rivalling anything else in town.” Halifax native and famed Black lesbian musician Faith Nolan also told Rose that she loved “shaking it” at The Turret.

In an admirable move, Rose writes candidly about the racism that sometimes greeted queers of colour at the city’s gay gathering spots. During the heyday of disco hits such as “I Will Survive” by Gloria Gaynor and “The Boss” by Diana Ross, Rose reveals that a local club intentionally played country music to drive Black patrons off the dance floor. “This particular attempt failed miserably, as many of the Black bar-goers had grown up in rural areas,” Izzard told her, with a laugh.

By contrast, The Turret helped to bridge racial tensions in Halifax when older, heterosexual Blacks (among them many devout church-goers) began attending the club’s drag shows. This, at the invitation of their fellow Black parishioners who, pre-dating RuPaul, had garnered huge followings for their fierce “Sissy That Walk” drag queen performances.

“The Turret was a place that could accommodate both the camp of drag and the seriousness of activism,” another source told Rose.

At a time when a lack of affordable housing plagues municipalities across the nation, Before the Parade is especially noteworthy for its discussion of the 1980s-era lesbians who formed the Halifax Women’s Housing Co-op.  Over a period of three years, the group bought four homes to support low-income women who couldn’t secure safe housing. Decades later, the Co-op program (which holds real estate now valued at more than $1 million) is still going strong.

“The Women’s Co-op experience came from people’s actual experiences or fears of being denied housing,” a program founder Diann Graham told Rose. “We weren’t too far past [the era] when you had to have either your father or your husband’s name on a bank loan to get a house.”

In closing, Rose noted that her partner (seated in the audience and proudly beaming) had recently recovered from an illness. “I was able to climb into her hospital bed and comfort her,” the author said. “I know that the LGBTQ-plus pioneers here tonight fought for the freedoms that I enjoy. I am forever in your debt.”

And with that, the audience again stood as one and cheered Rebecca Rose.