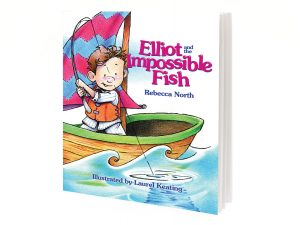 Elliot is a little boy with a big dream! He longs to catch the world’s biggest fish, so when his father tucks him into bed Elliot begs his father to take him fishing. And not just on the lake. Elliot’s father is a fisherman who goes fishing in the deep ocean, which is where the truly gigantic fish can be found. And that is precisely where Elliot wants to go!

Alas, he is too little. But he makes a wish and he soon finds himself on the ocean, ready to achieve his goal, with a little help from an assortment of animal friends. One by one they share their unique ways of catching fish with him, though none of them seem to be quite right for a small boy.

Maybe, just maybe, with his very own fishing rod and a little patience (not to mention a vivid imagination) he’ll catch the biggest fish ever. Sweet dreams, Elliot!

Rebecca North’s charming tale of childhood longing is earnest and authentic in its depiction of Elliot’s grand aspirations and his heartfelt desire to accompany his father in pursuit of his lofty goal. The subsequent dream sequence in which the animals offer their advice adds just the right amount of whimsy to the story, with the ending providing an element of surprise and wonder for young readers.

Laurel Keating’s softly rendered coloured pencil illlustrations have a cartoon-like quality that perfectly complements the accompanying text. Her use of colour and light, along with sketchy pen and ink outlines, are cheerful and energetic while the simply-drawn facial expressions ably capture and depict the character’s emotions.

Elliot’s grand adventure is an appealing read at bedtime, or anytime.