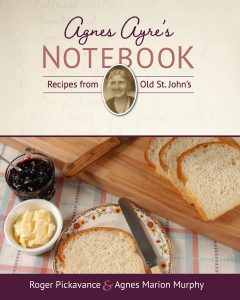 Boulder Publication has this to say of Agnes Ayre’s Notebook: Recipes from Old St. John’s, by Roger Pickavance and Agnes Marion Murphy:

“In the early twentieth century, Newfoundland trailblazer Agnes Marion Miller Ayre became an outspoken advocated for allowing women to vote. She was also an avid botanist and an accomplished artist who published a book, Wild Flowers of Newfoundland. One overlooked aspect of Ayre’s remarkable life was a recipe collection she wrote in a small notebook, starting in 1917. She didn’t bother with traditional recipes–not boiled dinner or pan-fried cod to be found–but collected out-of-the-ordinary dishes for the time, along with ingenious ways of being frugal with leftovers.”

So, though it may be almost May, it seems it might still be meatloaf season. Try Agnes’s own recipe, which more than holds up to the test of time! 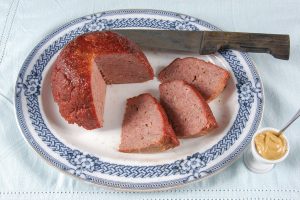 Grease a 3-quart pudding basin, loaf pan, or other similar container. Grind (or chop by hand) the beef and the ham. Smash the crackers into fine crumbs. Mix the crumbs, egg, salt, pepper, and milk to make a smooth paste. Mix in the ground beef and ham. Put this in the prepared container, tie a cloth over the top, and steam for 2 hours. Do not let the steamer boil dry; check the water level about halfway through and add boiling water as necessary.

Preheat the oven to 350ºF. Turn out the meat loaf and the cooking juices onto a baking dish and bake 1 hour, basting 4 or 5 times with the juices in the pan, or until the juices are reduced to a glaze and starting to blacken at the edges so that basting is no longer possible. Serve hot or cold.