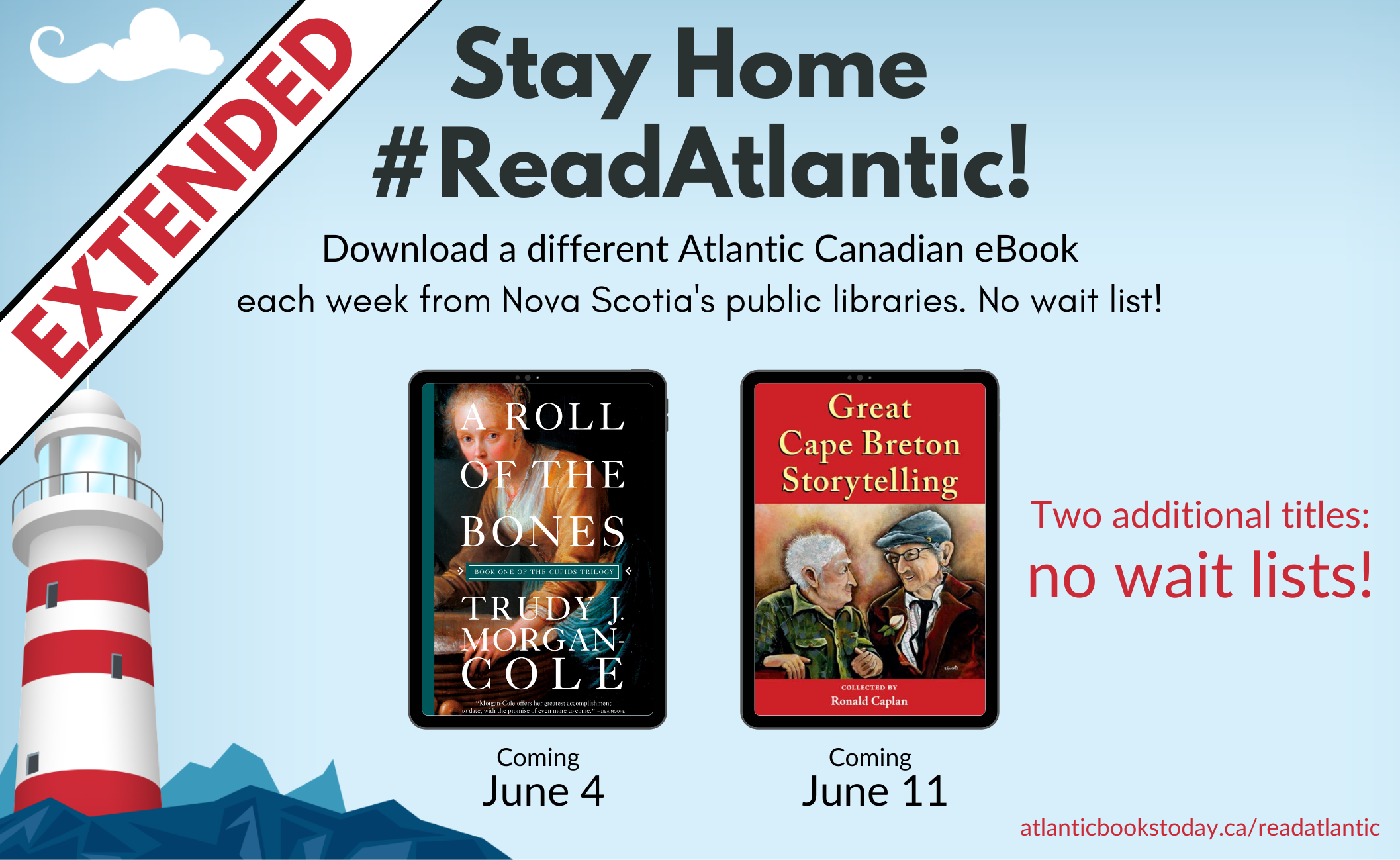 No more wait lists!  Public libraries across Nova Scotia are providing unlimited access to Atlantic Canadian eBooks from their Read Local collections to ensure you have all the reading material you need while we #staytheblazeshome. All you need is your free public library card. The campaign has been running for five weeks now, and due to the amazing response, we’ve added an additional 2 weeks!

Each Thursday, a new eBook from the collection will be made available for the week.  You can visit halifax.overdrive.com if you are a Halifax Public Libraries user, and novascotia.overdrive.com if you use another Nova Scotia Public Library. The featured book will be highlighted at the top of the page all week for both library systems, and accessible formats for readers with print disabilities are available from your local library. If you use the Libby app, you’ll see a link to download the eBook beginning on the dates listed below. Additional information on how to download can be found in the original post below. 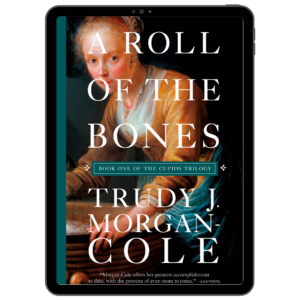 In 1610, John Guy established a small colony in Cupids, Newfoundland, on the very edge of a world unknown to Europeans. Two years later, he brought a shipment of supplies to his all-male settlement: 70 goats, 10 heifers, 2 bulls, and 16 women. A Roll of the Bones tells the story of some of these nameless women, tracing the journeys of three young people—Ned Perry, Nancy Ellis, and Kathryn Gale—who leave Bristol, England, for a life in the struggling community. Ned dreams of altering his fate with the promise of a New World. Kathryn only wishes to follow her husband—little dreaming she might find romance outside her marriage. And Nancy, the servant girl, has no desire to leave Bristol, but her fealty will ultimately test her ability to survive. A Roll of the Bones presents an array of unforgettable characters inhabiting the space where two worlds will collide, where the limits of love and loyalty will be tried in a harsh and unforgiving landscape. 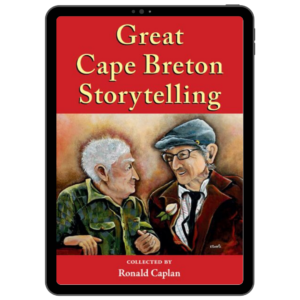 From a lifetime of collecting, Ronald Caplan offers tales from the rare complex of Cape Breton Island traditions. From a grim sealing trek to a mother’s courage in a windstorm, to memories of drunken hens, to a shark attack. The book includes fables from the island’s diverse ethnic heritage in among stories from the Gaelic, French and Mi’kmaq traditions. Good solid reading in one lasting collection! Canadian author Ronald Caplan’s award-winning work is best known for keeping the Cape Breton story alive through oral testimony and images. 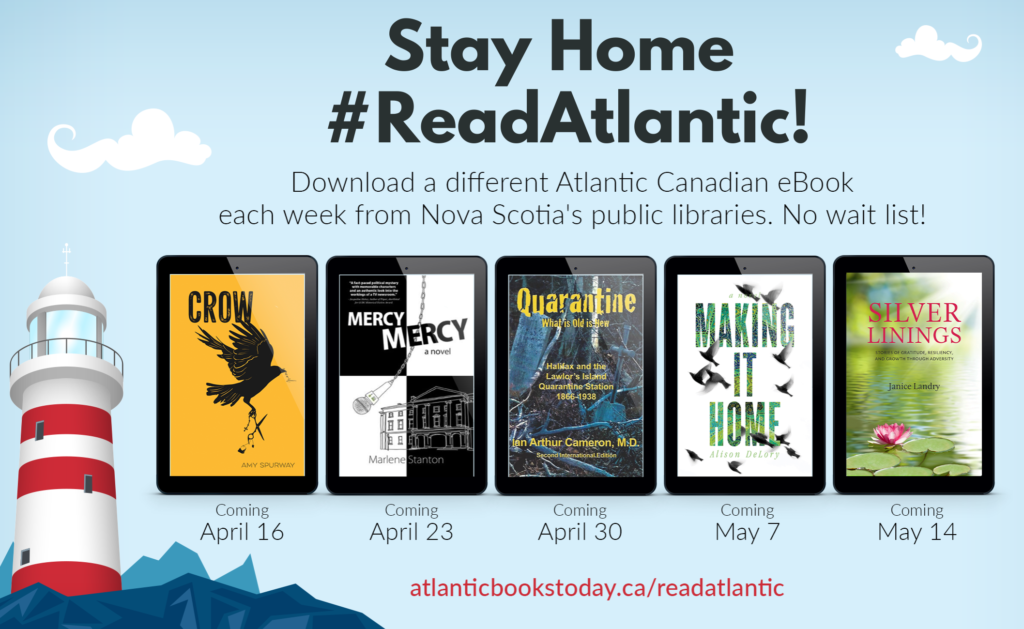 No more wait lists!  Public libraries across Nova Scotia are providing unlimited access to 5 Atlantic Canadian eBooks from their Read Local collections to ensure you have all the reading material you need while we #staytheblazeshome. All you need is your free public library card.

Each Thursday, a new eBook from the collection will be made available for the week. If you use the Libby app, you’ll see a link to download the eBook beginning on the dates listed below (more information on how to access eBooks from the libraries can be found below). 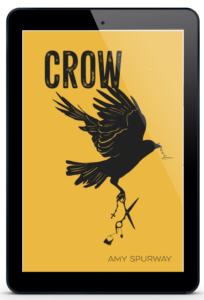 This Crow will ruffle a few feathers. When Stacey Fortune is diagnosed with three highly unpredictable — and inoperable — brain tumours, she abandons the crumbling glamour of her life in Toronto for her mother Effie’s scruffy trailer in rural Cape Breton. Back home, she’s known as Crow, and everybody suspects that her family is cursed. With her future all but sealed, Crow decides to go down in a blaze of unforgettable glory by writing a memoir that will raise eyebrows and drop jaws. She’ll dig up “the dirt” on her family tree, including the supposed curse, and uncover the truth about her mysterious father, who disappeared a month before she was born. But first, Crow must contend with an eclectic assortment of characters, including her gossipy Aunt Peggy, hedonistic party-pal Char, homebound best friend Allie, and high-school flame Willy. She’ll also have to figure out how to live with her mother and how to muddle through the unsettling visual disturbances that are becoming more and more vivid each day. Witty, energetic, and crackling with sharp Cape Breton humour, Crow is a story of big twists, big personalities, big drama, and even bigger heart. Read more about the book and author. 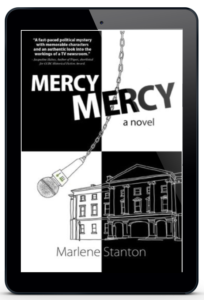 Smart, sarcastic TV reporter Mercy Pepper struggles with feelings of guilt after her cameraman dies while on assignment with her. A news tape that he had hidden in his personal effects contains a secretly recorded conversation, and Mercy picks up the scent of corruption. She soon finds herself mired in the muck of provincial politics—the power brokers and the opportunists and those willing to go to extreme measures for a piece of the pie.

With a keen observer’s eye and sharp, sparkling wit, Stanton, a former news reporter, delivers a compelling page turner set on Prince Edward Island. Mercy, Mercy is full of plot twists, engaging characters, police and political shenanigans, laugh-out-loud moments, and even a touch of romance. Read more about the book and author. 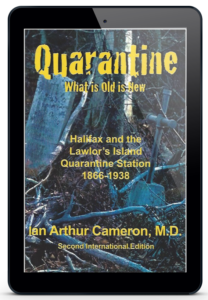 In Quarantine: What is Old is New – Halifax and the Lawlor’s Island Quarantine Station 1866-1938, historian and medical doctor Ian Arthur Cameron has produced a gripping history of quarantine in Canada, a timely topic right now. Now in its second international edition, it’s a story of the early years of immigration to Canada, and of marine transportation with wooden ships sailing reluctantly into the age of steam. It also details significant aspects of the history of Canada, Nova Scotia and Halifax, and recounts the story of contagious disease in the 19th-20th centuries. Lawlor’s Island in Halifax was the largest, year-round quarantine station in Canada, which served this country for over 80 years. It is also about more than the past, dealing with the future of diseases we face today, including SARS, West Nile fever, Zika, Swine Flu (H1N1), the feared influenza pandemics, and now in 2020 the coronavirus COVID-19. Read more about the book and author. 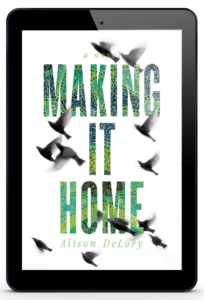 Tinker Gordon doesn’t want anything to change. He thinks that if he holds on tightly enough, his family, his tiny Cape Breton Island community, his very world will stay exactly the way it has always been. But explosions large and small—a world away, in the Middle East, in the land of opportunity in western Canada, and in his own home in Falkirk Cove—threaten to turn everything Tinker has ever known upside down.

Set variously in the heart of rural Cape Breton, on the war-torn streets of Aleppo and in a Turkish refugee camp, in the new wild west frontier of the Alberta oil patch, and in a tiny apartment in downtown Toronto, Tinker’s family, friends, and neighbours new and old must find a way to make it home.

In her heartfelt adult fiction debut, Alison DeLory ponders a question as relevant in Atlantic Canada as anywhere in the world: where and how do we belong, and what does it take to make it home? Read more about the book and author. 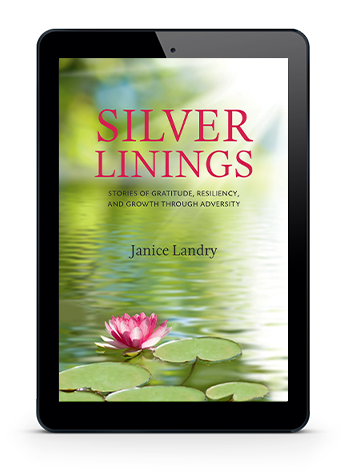 In Silver Linings: Stories of Gratitude, Resiliency and Growth Through Adversity, Janice Landry asks the very tough question, “What are you the most grateful for?” to fifteen inspiring Canadians from five provinces and two esteemed guests from the United States. One of the seventeen is Dr. Bob Emmons, considered to be the world’s pre-eminent expert in the study of gratitude.

Gratitude and resiliency are key cornerstones in the field of mental health. Science-based evidence, discussed by Dr. Emmons and others, underlines the importance of developing and practising gratitude. Research proves being grateful is good for us, both mentally and physically. Gratitude can improve our resiliency before challenges occur in our lives, which they inevitably do.

Let’s face it: it’s easy to be grateful when things are running smoothly. The people in Silver Linings have discovered that gifts may actually emerge from life’s toughest challenges. Landry’s own gratitude practice was shaken to its core when both her mother and a close friend, assisted-death advocate Audrey Parker, died within weeks of one another while she was writing the book.

Silver Linings is currently longlisted for The Miramichi Reader’s “The Very Best” Book Awards, in the Best Non-Fiction Category. Read more about the book and author.

Read along with us this spring and join the conversation: #ReadAtlantic #StayHomeReadAtlantic
Look for #TurnthePageThursday posts each week when the next book is live and ready to download!