Read Local 2015: A gritty short story collection that will keep you reading 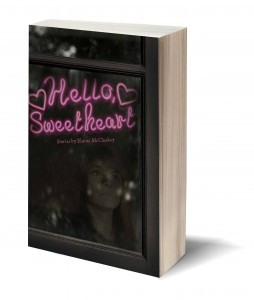 Hello Sweetheart will keep you reading, but be warned, this is not a warm and cuddly story collection. Throughout its 21 tales, the book introduces readers to gritty, hard luck characters trying to live their lives amid ambition and disappointment, dangerous spaces and people, drugs and death. But instead of scaring you away that should, most certainly, pull you in.

Elaine McCluskey, began her writing career as a journalist covering stories including the Ocean Ranger tragedy and the Gander air crash. Today she’s best known as the author of a novel, two other short story collections and for her stories published in literary magazines including The Fiddlehead, The Antigonish Review, The Dalhousie Review, Gaspereau Review, Room, Other Voices, Pottersfield Portfolio and Riddle Fence.

McCluskey’s beat reporter roots are clearly showing in this most recent collection. The stories are told from varying points of view, but one consistent note is the level of descriptive detail that invites readers to see beyond the action and dialogue into a character’s innermost thoughts:

Being in Bonnie’s presence was like being trapped in an airport with travellers whose flights had been cancelled for the second straight day, dirty, tired people ready to snap at the slightest provocation, people who felt wronged, and in those settings there was always one person who remained in good cheer, the person who took the setback as an adventure, the person who brought out a deck of cards and found blankets, the person who lifted everyone’s spirits, and that person was Bryce’s bride.

This collection is packed with snapshots of characters’ past and present lives, and most feature a story within the story. For example, in Jaw Breakers, a Canada Games Gold Medalist laments his father’s missing sense of humour and his former glories in the pool while narrating his coaching session of a morning swim class populated by middle-aged moms and 9-to-5ers.

While the settings vary, there is a strong Maritime flavour to these stories. A Newfoundland dialect pops-up on a bus bound for Saskatchewan and notable Halifax landmarks rise in the view of a docking cruise ship.

I’m a big reader of short story collections because the genre lends itself well to travel and hectic work weeks, but I often wonder what happened to the characters after their limelight shifts to the next story. One of my favourite aspects of this book was McCluskey’s ability to transport a character from his feature story into another as a bit player, giving those who are particularly likely to capture the reader’s interest a little more life. I’d recommend this book to anyone who wants to bring a little piece of home on their next journey.