Read Local 2015: A gritty, beautiful portrait of a father and son

Book awards season is on the horizon here on the Atlantic coast, so this feels like a great time to start exploring the best of what our region had to offer in 2014.

Many of the books given a nod for one of the eight Atlantic Book Awards short lists have already been featured in our pages. Those Splendid Girls: The Heroic Service of Prince Edward Island Nurses in the Great War by Katherine Dewar, Grist by Linda Little is on the Jim Connors Dartmouth Book Award for Fiction list, and Island Kitchen by Chef Mark McCrowe with Sasha Okshevsky for our own Atlantic Publishers Marketing Association Best-Published Book Award, to name but a few. The one book I hoped to see on someone’s short list was Just Beneath My Skin by Nova Scotian author Darren Greer. 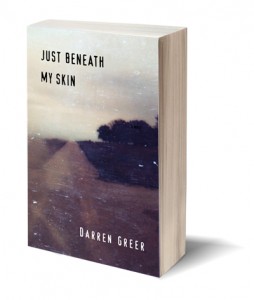 His name will be familiar to many. His first novel, Tyler’s Cape, earned critical acclaim, while Still Life with June won the ReLit Award in 2004. Greer’s latest novel is no exception to praise. Just Beneath My Skin is shortlisted for the Jim Connors Dartmouth Book Award at the 2015 Atlantic Book Awards and the Thomas Raddall Atlantic Fiction Award at this year’s East Coast Literary Awards.

In this book, North River, Nova Scotia, is a gritty, hopeless place. The mill that powered the town’s economic engine is gone. Now pathetic men pass a bottle of cheap wine under the corner store’s awning, while down the road a women stares out the window, biding her time until cheque day. Its grey pall will be familiar to anyone who grew up in a similar space or, perhaps more aptly, has come home to visit a small rural town far past its prime.

Jake MacNeil returns to this low place not to visit but to claim his son, Nathan, from his alcoholic, abusive and, above all, angry former girlfriend. Over the next 24 hours there will be tears, painful personal introspection and a death.

It’s difficult to discuss the novel’s plot without giving too much away, but I can tell you that while I’ve painted a bleak picture above, Greer’s prose highlights a heart-wrenching beauty in this desperation:

It starts raining and Nathan comes along. It pisses me off to no end that Carla makes him go all the way downtown to pick up a carton of milk and doesn’t even bother to make sure he wears the right clothes. I call him over.

Nathan and I shoot the shit for a while, and then Johnny wants more wine and I have to leave. I can see the kid wants more from me – Christ it’s been six months since he’s seen me but I still have to put some time in with Johnny before he’ll let me off the hook. So I tell Nathan to go home and I’ll see him tonight. Poor kid. I look back at him once, standing there in the middle of the street, shivering in the rain without a jacket, holding the carton of milk for dear life. I feel such a wrench for him in my gut I feel like crying. Johnny’s looking at me, like he knows what I’m thinking and despises me for it, and so, to block him I think of something else, I whisper under my breath: the river flows only one way…

The story alternates between Jake and Nathan as narrators, and flows back and forth through time to flesh out the stories of their lives together and separately. Jake’s thoughts focus most on his strained relationship with his own father as he struggles to decide what kind of father he will be to Nathan. The boy, for his part, contrasts his fear of his mother with his hero worship for Jake, who he barely knows. Through this interplay of memories the reader sees how one generation’s memories lend themselves to the next.

I’m not often a fan of child narrators. Few authors can hit the right tone without dipping too far into a sickly-sweet innocence or a simplicity that fails to drive the plot in a meaningful way. Not so with Greer’s Nathan. He is precocious without appearing too adult, but just child-like enough to hope that the world will give him a fair shake. The shifts between Nathan and Jake’s views are staggered at first, but the interchanges speed up as the action of the plot kicks in.

Some readers will find the initial chapters a tad slow, but bear with this author. By the mid-point you’ll be unable to put this book down.