Read Local 2015: A dialogue driven account of one man’s battle with the RCMP 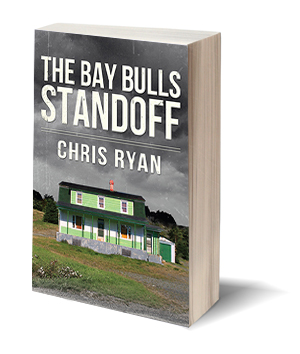 One of the best parts about being the editor of Atlantic Books Today is the steady stream of great regional books passing through our office. When The Bay Bull Standoff  by Chris Ryan (Flanker Press) landed on my desk in December, I’ll admit I was intrigued to read an account of this story that I remember first seeing in, of all places, a morning newspaper in Montreal back in 2010.

Ryan’s story offers his recollection of an eight-day, armed standoff between Leo Crockwell, a 55-year-old electrical technician, and the RCMP that played out in the fishing community of Bay Bulls, Newfoundland and Labrador.

The story begins with what the author describes as “an altercation with his younger sister,” which ended with Crockwell following his mother and sister out of the home the three shared while carrying a rifle. What followed was a week many in Newfoundland, especially the town’s 1,200 residents, will remember forever.

The book is broken up into chapters covering each of the eight days, which helps the reader follow the story as it unfolds. But what makes it unique is its stylistic approach. Rather than telling the story in a narrative form, Ryan takes a documentary-like stance by recounting the events of each day through the dialogue of the people he encountered during the standoff.

As an avid birdwatcher, Ryan had the scopes and binoculars to keep a close eye on the Crockwell family home from an SUV parked nearby in an elevated gravel pit. Ryan, his brother Joe, and a large cast of locals discuss the events of the standoff as it plays out, drawing readers into the action. Ryan openly admits in an author’s note that the dialogue is “as valid as memory allowed” and that some “has been changed, added to or altered for the benefit of the reader,” but for the most part it feels very natural.

The constant coming and goings of the many bit characters who punctuate the book can get a little confusing at times, but overall the story is presented in an easy to follow fashion. The action waxes and wanes, and some of the scenes featuring Ryan and his brother mulling over the situation can get a little dry, but there’s more than enough here to keep you reading. When RCMP officers send in a remote Explosive Disposal Unit robot to flush Crockwell from the house or, their final salvo, shooting 227,000 liters of cold water into the house to freeze him out, the reader has a front row seat in the SUV with Ryan and Joe.

Overall, I enjoyed the book and Ryan’s ability to capture the small-town vibe in Bay Bulls during the standoff that made national news and inspired a folksong or two. While its most likely audience is those living in the tiny satellite towns surrounding St. John’s, it can easily capture the interest of those outside the region.