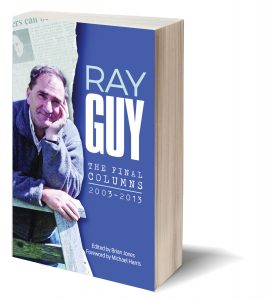 Newfoundland and Labrador has its own political realm and doesn’t necessarily adhere or attach itself to Canada’s rules or logic. These are lands and waters of their own and columnist Ray Guy devoted his writing career to the province, its humour, hard knocks, political spheres and relentless weather.

Edited by Brian Jones with a foreword by Michael Harris, Ray Guy The Final Columns 2003-2013 spans the rise and fall of former premiere Joey Smallwood, Brian Tobin’s ignorance, weather woes and small town politics, and gets away with calling St. John’s “Sin City Upon Cesspool.”

Born in Come By Chance, Guy’s mix of satire and humour depicts the very crux of Newfoundland and Labrador and the realities of its outport-versus-urban politics, Anglican-versus-Catholic judgments and townie-versus-baymen divides. While writing for newspapers, magazines, radio, television, theatre and even the silver screen, Guy studied journalism at the Ryerson Polytechnic Institute and for many years wrote for the St. John’s Evening Telegram, Atlantic Insight and the Newfoundland Quarterly.

He became a household name taking stabs at Joey Smallwood in a weekday column with The Telegram. Some of these columns became That Far Greater Bay and were awarded the Stephen Leacock Award, an annual literary prize for the best book of humour published in Canada. Guy was awarded an honorary doctorate by Memorial University in 2001. He died of cancer at the age of 71 in Spring 2013.

Guy’s legacy lives on through a lifetime of prose, decades of published and collected satirical columns. By far my favourite of Guy’s work, “Life Lessons from Bell Island,” from December 2006, contextualizes the spirit of a place very near. He writes, “my first impression there on this huge table high above the water was that the rest of the world ceased to exist. The place was self-contained. Bell Islanders were self-contained–surely, if there was any better place to be, they’d never heard of it.”

Wafts of nostalgia washed over me as I read of his annual visits to Bell Island and how the place disorients and re-orients. “Pink will always be the colour of Bell Island to me,” he writes, noting the grey-red mud surrounding the mines. Guy writes of the mass exodus of Bell Islanders to Cambridge, Ontario, which struck a chord, as my grandmother was from the little bell-shaped island and she moved up with her sisters. Half a dozen of them piled into a seatbelt-less car from Wabana and made their way to the Mainland. Apparently, my grandmother screamed at the top of her lungs merely being a passenger down the twelve-lane 401. Once they arrived, her sisters decided they were homesick and drove back home to Bell Island the next day. But my grandmother, self-contained as she was, stayed.

The thing about revisiting Guy’s columns: his work embodies what it means to be a Newfoundlander, the various angles. His humour, quick wit, nostalgic rhetoric and personalized insight into the island in the sky remain relevant.

Guy even makes the weather something worth reading about. His meditations on Canada’s switch to metric and musings on winter seem apt as I write this review with a sunburn from Toronto and the Avalon Peninsula gets slammed with another snowstorm on the first week of April. Currently, St. John’s harbour is covered in massive ice floes.

“Thanking God we’re surrounded by water does us no good at all once April comes. That same water slows down the brisk jump into spring they get on the Mainland,” Guy writes. “They’re slapping on the sunblock in Toronto and we’re still slipping and sliding down Signal Hill … it’s crucifixion by contrast.”

Guy’s humour shines in every column and his wisdom is both grandfatherly and brattish. He wrote about Newfoundland as an islander, a heartfelt insiders take, and yet with a critical seabird’s view. Intimate and observational, Guy understood the complexities of a province that enchants and traumatizes, exploring the dark underbelly, false truths and inflated political perceptions. Yet it remains a place worthy of devoting a lifetime of writing and to.