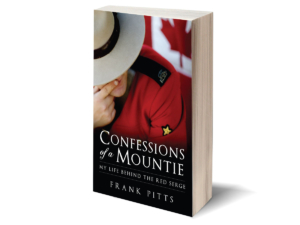 In Confessions of a Mountie: My Life Behind the Red Serge, we are offered a rare glimpse into the everyday life an RCMP officer. The author, Frank Pitts, dedicated 32 years as an RCMP officer honouring the motto, “Maintiens le droit (defending the law).”

The main storyline of the book revolves around one incident involving a machete-wielding, foaming-at-the-mouth suspect who is demanding to be shot. Arriving at the scene with his backup still minutes behind, Pitts tells the story through a series of flashbacks as he tries to defuse the situation. He recounts his childhood and growing up in the community of Freshwater, Bell Island, Newfoundland and Labrador, with his ten siblings. He also weaves into the stories of some of the other cases he worked on.

Pitts writes openly and candidly of his work, how the role of police officer changed over his three decades years of service and how no amount of training can prepare you for the realities of the trauma faced on the job. The stark realities of children being raped and/or killed, the devastation of car accidents or attending a domestic dispute are all part of a police officer’s life. Pitts tells these stories with candour in the hopes that people will better understand that police officers are just ordinary people doing the job they were trained for.

Confessions of a Mountie: My Life Behind the Red Serge is written with clarity, wit and self-effacing honesty, bringing Pitts’ stories to life for the reader. He received many commendations and long service medals; there are bound to be more stories from Frank Pitts.

Confessions of a Mountie: My Life Behind the Red Serge
by Frank Pitts
Flanker Press