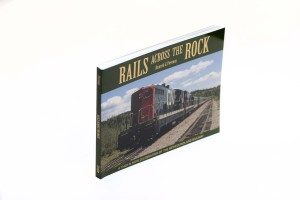 Rails across the Rock is primarily a picture book with colour photos of nearly 90 places on the now-defunct Newfoundland railway.

Verso photos, mostly from the 1960s to the 1980s, show trains. Retro photos show the same sites today—no trains, no rails. Earlier photos (the railway dates from 1898) would have been appreciated.

The book is for the railway buff who might not find the sameness in images that struck this casual reader. An exception is the photo that shows a train winding its way through a community “near Petries.”

In addition to the captioned photos, the book contains a well-written foreword, a preface, a brief history of the Newfoundland Railway and a short interview with a railroader.

The Newfoundland railway: For some it arouses nostalgia; for others, the loss still smarts.
Pieroway’s celebration of the railway is a reminder that, long before roads, we had a way of crossing the island through a beautiful interior.

Rails Across the Rock: A Then and Now Celebration of the Newfoundland Railway
by Kenneth G. Pieroway
$22.95, paperback, 150 pp.
Creative Book Publishing, August 2013

Marjorie Doyle’s latest book is A Doyle Reader: Writings from Home and Away.