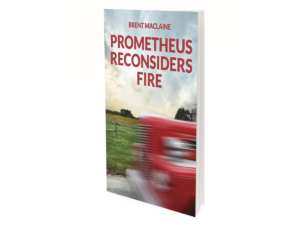 The appearance of Brent MacLaine’s first poetry book in 1998, Wind and Root, heralded a successor to Milton Acorn, the legendary poet from PEI. The similarities included passionate but not uncritical devotion to the landscape and heritage of their island home, and an equally strong attraction to travelling and living in other regions – Acorn in several Canadian provinces, MacLaine in Western Canada, East Asia, Greece, Ireland, Tasmania.

Through five collections, including Prometheus Inherits Fire, another parallel with Acorn stands out: MacLaine’s commitment to structure the inventive individuality of free verse with rigorous infusions of traditional poetic forms and techniques. T.S. Eliot, who wrote that “No verse is free for the [poet] who wants to do a good job,” would have no complaint about the exemplary craft in MacLaine’s poems. And Acorn, “the People’s Poet,” would likely applaud “Sestina for Early Morning at the Service Station Coffee Shop” for its formal treatment of life’s daily bustle and sensations, and MacLaine’s suave blending of elegant and colloquial language.

The rootedness, roving, and craft are plentiful in Prometheus. So, too, are MacLaine’s erudition and savvy: cosmopolitan and regional, classic and contemporary, urban and rural. As a professor at UPEI, he taught European literature in translation and Atlantic Canadian literature – Homer, Nowlan and MacLeod, and Don DeLillo.

Thus, we have Prometheus interrogating his self-sacrifice adjacent to “The Northern Flicker.” Poems about “Queen Anne’s Lace” and humpback whales are juxtaposed with “Elegy for Mikhail Kalashnikov,” who longed to be a poet and, instead, invented the rifle:

This is what comes of loading a gun, / latching in the magazines, with a rhyme scheme in mind.

MacLaine’s polished wit is abundant – sometimes playful and kindly, sometimes cautionary or mordant – as in the chilling dramatic monologue, “The Dictator’s Son.”

MacLaine offers a suite of poems set in Montreal, where he currently resides, but his native island is hardly forgotten:

Seated at a restaurant table, / lovers smile at us and sip champagne with Malpeque oysters.

He dives to the ocean floor off Newfoundland in “Lost with The Titanic: An Inventory,” and surfaces back home with “The North River Fire Hall Suite.”

As MacLaine commuted between his home on his family’s farm and the university, he passed the local fire hall with its admonitory and testimonial signs: “Always leave yourself an emergency exit,” “Chance takers are accident makers,” “Firefighters save lives and homes.” MacLaine has spun these aphorisms into thirteen tragicomic meditations as entertaining as they are poignantly ironic and wise.

Prometheus Reconsiders Fire is the latest triumph from one of this region’s most gifted and gift-giving writers. MacLaine, like Acorn before him, has helped redefine what it means to be an “Island” or Atlantic Canadian poet: possessing the skill and grace to move artistically from local fire halls and flowering fields to cosmopolitan cities and enduring mythologies. Roots and wind.

Richard Lemm is an award-winning author who has an MA in English from Queen's University and a PhD from Dalhousie University. He has been a faculty member at the Banff School of Fine Arts, and has been writer in residence and poetry instructor for various community colleges, regional libraries, public school districts, and summer writing programs across the country. He is professor of Canadian and English Literature and Creative Writing at the University of Prince Edward Island. He is the author of several volumes of poetry, as well the biography, Milton Acorn: In Love and Anger and the short story collection Shape of Things to Come.