Dr. William O’Flaherty shares stories of what awaited him on the other side of the threshold making house calls for over forty years, two provinces—Newfoundland and New Brunswick—and thousands of patient—both human and animal—encounters 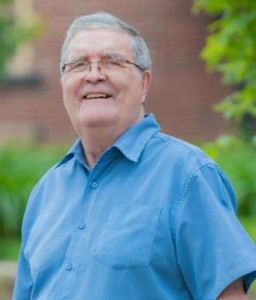 Spend an hour with Dr. William (Bill) O’Flaherty and you’ll gain fascinating insights into the people, social culture and history of Newfoundland. All laced with the doctor’s special prescription of humour and understanding of human nature.

An hour can easily flow into two or longer. More than forty years as a medical doctor, in his birthplace of rural Newfoundland then in the Miramichi area of New Brunswick, provided him with enough stories, of life, death, sadness, devotion, toughness, bemusement—and the definitely un-looked for—to fill several books.

Bill O’Flaherty’s first book, Tomcats and House Calls: memoir of a country doctor, by Boulder Publications published in May has fast became an Atlantic best seller. Moving animatedly as he talks, the now retired doctor has an easy, non-stop flow of stories to share. “Then there was this,” he says, launching into another colourful anecdote, barely completing that story before another incident occurs to him. 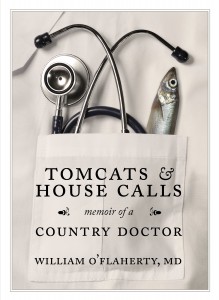 If he was this much of a raconteur with his patients, and I suspect he was, many house calls must have been eagerly awaited.

But all was not pleasantry in pre-Confederation, pre-Medicare Newfoundland. “I was often woken at three a.m. and people expected the doctor to make a house call whatever the time,” he recalls, adding he thinks house calls should still be part of a doctor’s work. Before Medicare doctors were poorly paid and many people had to pay their doctor in-kind, often with potatoes or salt fish, or, as I heard later, with other more problematic gifts.

Though two of Bill O’Flaherty’s aunts were nurses there was no strong medical tradition in his family; his father was a fisherman. Despite the first story in his book, the twelve-year-old Bill did not have a moment of epiphany when he “walked his legs off” to save the family cow.

Attending Saint Dunstan’s University in P.E.I., Bill studied biology and science. “I was fascinated by dissections,” he remembers. “Microscopes opened up the world for me.” Though an English professor encouraged him to write—he edited the college magazine—it was a priest who encouraged his interest in medicine. After receiving his medical degree from McGill, Dr. O’Flaherty did a seven-year internship and family practice in Saint John’s. In 1967 he returned to Northern Bay, his birthplace, as the only country doctor along twenty miles of coast line. As you will read in his book, the nearest veterinarian being 100 miles away, he was also called upon to treat animals. One of my favourite stories is about “Bessie, the Fightin’ Tom.”

Asked how, from so many inspiring, sometimes sad, experiences he chose the twenty-four in this book, Bill says they were the ones he found most typical and reflective. Among my other favourites are the hilarious “The Two Mabels”, “Emily, Joshua, and the Blueberry Pigs” and the sad “An Hour before Dawn”.

There are many more stories tucked away in Bill O’Flaherty’s mind and heart, though he is reluctant to say if he will write another book—this one took him six months. He’s travelling a lot right now, for readings and books signings. If he does write a sequel, this next story is a must.

A family paid him with six hens, put in a lobster trap for safe transport. Settling it on the back seat of his shiny new red Volkswagen, “smelling just as a new car does,” Bill drove off. On the way home he saw a white flag at the end of a lane; the traditional signal for the doctor when passing to visit. The visit took a while. When the doctor returned to his car, the hens had freed themselves and were settled on the dashboard, the passenger seat and all over the interior. “The car never smelt the same again,” Bill says with a rueful smile. Just another day in the life of a country doctor.