Productivity and Prosperity: An Academic Takedown of Rapid Economic Growth 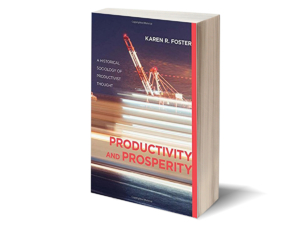 Dalhousie sociologist Karen R Foster sees all this quite differently. The infamous Ivany report, in her academic treatise Productivity and Prosperity, would be a prime example of public policy in pursuit of the false god of “productivism.” While that report warrants no more than an endnote in her book, it is the first thing that comes to mind when digesting this dense tome.

Foster is no friend of productivism (the pursuit of economic growth as the means to prosperity, measured by labour productivity). Tracing the dominance of productivity thinking back to the 1920s, she analyzes its clear expression in Frederick Winslow Taylor’s scientific management theories and deconstructs its mesmerizing effects on business thinkers and economists.

Penetrating the neo-Marxist analysis, it is clear that Foster favours “slow productivity growth” emphasizing “quality over quantity.” She argues for an economic vision in which resources are “distributed more evenly among those in the workforce.” In today’s economy, she says, much of the labour force is stuck in what David Graebner calls “bullshit jobs.” Workers are compelled to accept the scraps left over when the pie is divided up among society’s economic elites.

The future, Foster argues, lies not in prosperity generated by growth, but rather in destabilizing the productivist regime in the interests of the common good. It is difficult to imagine that happening anytime soon, however, here in the hard-pressed Atlantic region.