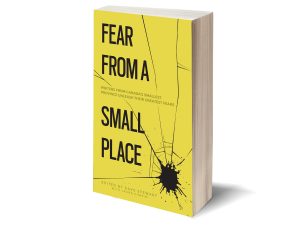 Prince Edward Island has produced its share of literature, inspiring place-based novels, poetry, children’s books, and what seems to be a never-ending supply of historical writing. One genre that is rarely associated with the province, however, is horror. While the local oral tradition is rich with stories about forerunners, personal appearances by the devil and other supernatural occurrences, this has not translated into the written word. Prince Edward Islanders may know their neighbour’s business, Dave Stewart notes in the introduction to Fear From A Small Place, but what truly frightens them remains largely unexplored.

The 20 short stories contained in this anthology are guided by two thematic underpinnings. All authors have, in the words of Stewart, “been shaped in some part by Prince Edward Island,” whether through birth, residence or in one case marriage. Authors were also given great leeway in defining “horror” on their own terms. The creative flexibility afforded the authors is matched by a diversity of experiences. Contributors range in age from teenage to senior, with the majority somewhere in between; some are publishing for the first time while others have numerous books under their belts.

As with any collection of this sort, some stories resonate more than others. And what works for this reviewer may not with another reader. Disclaimers aside, one standout contribution is Kelly Caseley’s “Mistress.” A short story in the truest sense of the word–it contains just 25 words–it highlights the squeamish feeling of appearing in public in the same outfit as one’s peer. Far-removed from the tropes of masked killers and sundry monsters, it nonetheless speaks to a deep-rooted fear that many have.

Another standout is Russell Stewart’s “The Flag.” A piece of nonfiction told from the perspective of the author 26 years earlier, it describes his family’s early morning drive to an undisclosed location in Charlottetown. While Stewart and his sister struggle with sleep in the backseat of the family car, it is revealed in the postscript that his parents had joined other Islanders in attending the hanging of two men charged with murder. While this, the last public execution in Prince Edward Island’s history, has been written about elsewhere (most notably Michael Hennessey’s award-winning fictional account, The Betrayer, published by The Acorn Press in 2003), the juxtaposition of innocent youth unknowingly attending this gruesome event as the assembled adults treat it as a public outing speaks volumes.

Also worth highlighting is Dale Nicholson’s “No Regrets.” An eight-panel comic that addresses loneliness among senior citizens, it strikes a chord due to the reality of its premise. Like many other contributions to Fear From A Small Place, it reveals that for many of us, our deepest fears concern personal relationships and how they may play out over an extended period of time.

One of the strengths of this anthology is the diversity of formats it represents. While most contributions appear as traditional short stories, Nicholson’s comic is joined by poet John MacKenzie’s “Blood and Frost in a Stand of Birch (a redneck neurological noir in narrative verse)” and David Moses’ “Birth Father,” which is presented in the form of a television script.

I enjoyed this book and encourage fans of the horror genre–local or otherwise–to give it a read. My endorsement, however, is not without quibble. The book is quite attractive, as one might expect from a publication put together by a graphic design firm. That said, I did find myself distracted by the appearance of the occasional typos. While not the end of the world, these minor blemishes could have been rooted out with more vigilant proofreading, thereby affording the stories the final form they deserve.