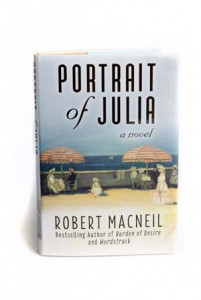 At least she was sick before breakfast and once the heaves had subsided, Julia was hungry and eager to be out in the glorious air she drank in from her window. Pale sunlight was turning the calm Mediterranean a cerulean blue where the water was deeper, shading to the palest opalescent turquoise where its waves lazily uncurled on the shingle beach. Drinking in the joy of those colours, she sighed. Whether she was going to continue painting or not, she could not help looking with the painter’s eye. That was Morrice’s great faculty, his delicate eye, an eye that could see with exquisite refinement and colour sense. Even Frenchmen, or the most discerning of them, were ravished by his paintings of Normandy and Brittany and especially Paris. The French government had bought three of them. Some critics had bought him for their private collections. Of the thousands of painters working in Paris, he was one of very few, particularly among foreign painters, to have earned real distinction. Measured by her small talent, Morrice was a giant, who should be stimulated by such admiration to fresh achievement. He should be at the height of his powers, not dissipating them as he was. The previous afternoon he had looked almost drained of energy—until, it was true, the evening had revived him. He had seemed quite vigorous when he suggested painting her.

If doing that would reawaken his ambition and get him back to work, it would be right to do it. But this morning she did not feel like it in the least. She turned away from the window to go on dressing, wondering at her reluctance. Anyone interested in art should be honoured to pose for an important artist. Quite selfishly, it conferred a little posterity. Whomever Morrice painted would be known and looked at in galleries for generations. Even in Canada, slow to appreciate him, Morrice was now hanging in the National Gallery and many others. She raised a leg to pull on a stocking and stopped. She had felt no shyness about posing for him before she was married. Why would it be different now? But it was, inexplicably. Before she decided, she wanted to take off her clothes alone and scrutinize her body carefully. To satisfy herself about what? Never mind. She could do it later. She needed to be out now in the charming streets she could see from the window, amid the cheerful noises and delicious smells. She pulled up the stocking and secured it.

Wanting some time to herself, she left the hotel so as not to pass the café where she guessed Morrice might be and walked up Rue Meyerbeer. It was absolutely true that changing the scenery helped change the spirits. The undercurrent of anxiety she’d been living with began to dissolve as she headed away from the sea towards the old city of Nice, absorbed in the busy life of the streets, the costumes, the shops, the architecture, the different odours of the region’s cooking, the flowers strangely in season, the semi-tropical trees and foliage in the parks, all just exotic enough to be fascinating. By the time she had found a busy café on Place Masséna, with its shady arcades and terracotta- and pistachio- coloured buildings, she was cheerful. While she waited for her café au lait and croissants, she realized just what had been inhibiting her: Lucy.

Born in Montreal, Robert MacNeil grew up in Halifax, attended Dalhousie University and graduated from Carleton in Ottawa. After early work as a CBC announcer, he was a journalist for forty years with Reuters News Agency, NBC News and the BBC, culminating in twenty years as Executive Editor of the MacNeil-Lehrer NewsHour on PBS. His bestselling novel, Burden of Desire, won rave reviews in Canada and the U.S. He is also the author of two other novels, The Voyage and Breaking News; three memoirs, The Right Place at the Right Time, Wordstruck, and Looking For My Country; and co-author of The Story of English and its sequel, Do You Speak American? He divides his time between New York and Nova Scotia.