Portrait of an Architect of the Privatization of Nova Scotia Power 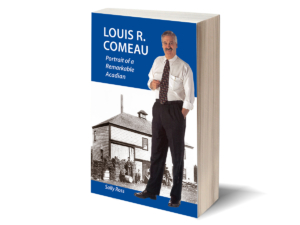 Author Sally Ross informs readers at the start that the book in their hands was requested and commissioned by the man who is the subject. Ross affirms she alone retained control over all content. Though he read the manuscript before publication, Louis R. Comeau requested no changes to what is a sympathetic and appreciative telling of his life story.

There is much in this book about Louis Comeau – one of the most prominent Acadians from southwest Nova Scotia in the latter half of the 20th century – that will interest many different readers. Sally Ross deftly covers a fair amount of Acadian history, politics and business as she presents her biography of a colourful and prominent figure.

In the opening chapter, the author traces Louis Comeau’s family back through ten generations, to the middle of the 17th century. It’s the broad sweep of Acadian history seen through the lens of one particular family.

Subsequent chapters follow Louis Comeau as he grows up in Clare in the 1940s and 1950s. It’s an effective portrayal of a vanished era. As a young man, Comeau successfully entered politics in the federal election of 1968 — following family tradition and running as a Conservative. Comeau’s time in Ottawa, however, was cut short. In 1970 he was named president of what then was the Collège Sainte-Anne in Church Point. (Today it is a full-fledged university, thanks in large part to Comeau’s leadership.) In the seven years Louis Comeau was at its head, the college underwent a dramatic transformation with new buildings, a secular orientation and a fresh focus as a bilingual institution that would attract Anglophones.

When Louis Comeau thought it was time to move on from Sainte-Anne, he turned to the family business. He took the helm of a lumber company in Meteghan that his grandfather had started in the early 1900s but which was going through a hard time. Comeau turned the business around.

Next, in 1983, came an even bigger move: Louis R. Comeau was named president and CEO of Nova Scotia Power. This was while NSP was still a government agency. Comeau would be a key architect of NSP’s transition to become a private company. That transformation was a huge accomplishment for Comeau, yet there were some at the time and since who have lamented turning a public utility into a private company. It would have been good if the author had added some of those contrary opinions in that part of the book.

A pleasant surprise near the end of the book was that Sally Ross added an entire chapter — “The Woman Beside the Man” — on Comeau’s wife, Clarice Marie Thériault.

The book contains a solid bibliography on the sources used to write each chapter.

A J B Johnston is a historian and novelist with sixteen books in print. France made him a chevalier of its Ordre des palmes académiques for his body of work on Louisbourg. For more on him, go to ajbjohnston.com; instagram.com/ajbjohnston; or Facebook at A J B Johnston, Writer.